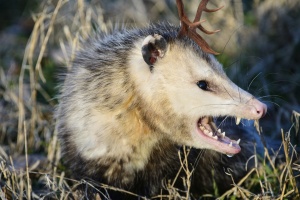 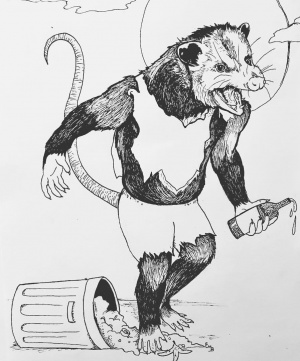 I am currently a half-opossum, half-human (used to just be an awesome opossum) that has to "restore the balance" as ordered by the High Druid, Ull.

Many of the rogue’s powers function only when the rogue has momentum.

The default is that you can use momentum powers without losing momentum, but a few powers specify that you must spend your momentum to use them. You don’t have to use attacks that require momentum against the foe you hit to gain that momentum.

Once per round when you make a rogue melee weapon attack against an enemy engaged with one or more of your allies, you can deal +1d8 (Improved Sneak attack) damage if your attack hits.

Even rogues whose backgrounds don’t have anything to do with noticing, avoiding, or disarming traps have a unique knack for dealing with traps.

Your Sneak Attack damage is better than other rogues. Use 1d8 instead of 1d6.

Once per battle as a quick action, you can spend your momentum to pull off a daring stunt the likes of which others could scarcely conceive. You may make an attack as part of the stunt, but you’ll need to roll normally for the attack. This is an improvisational talent.

As a swashbuckler, you do not need a difficult skill check to pull the stunt off.

You gain a +5 bonus to disengage checks. In addition, while you are moving, if an enemy moves to intercept you, you can make one disengage roll per intercepting enemy as a free action to avoid that enemy, but you must stop the first time you fail any of those disengage checks.

When you hit on a even number of 10 or less, gain a basic attack with your tail once per battle.

Once per day as a free action, you can add your Sneak Attack damage to any hit against one target that would not otherwise have qualified for the damage.

The power also triggers on a ranged attack against AC.

Nature's Bauble
Neck. Likes clean things
+1 PD
+4 to hide in natural settings
A polished acorn that hangs from a necklace of preserved vines

Bandoleer of Pockets
Waist. Constantly attempts to refill everyone else’s drinks. Or potions. Or ration bags.
Recharge: 16+
Increase maximum recoveries by +1
Drink a potion stored on this belt as a quick action instead of a standard action. (It also provides stylish flaps for up to six potions.)
A polished acorn that hangs from a necklace of preserved vines