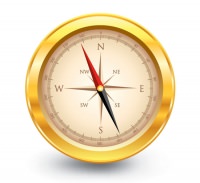 Cresting stormy waves in the dead of night a ship, tattered and torn, pulls into the sea port. Painted over the nameplate is a new name "The Stranger's Bride". Those aboard are gaunt and sickly. Nurtured back to health, they tell a story of a land of fertile soil that is rich in lumber and gems, with nary man nor monster in sight.

One year later two rival merchant houses prepare expeditions to claim their piece of this New World. Soldiers sign up for glory. The indentured board for their serving term. The bold swagger on board for a land of treasure. Criminals seek refuge in a lawless land.

You board the vessel, "The Stranger's Bride", for reasons that are your own.

The world from which you depart is home to traditional medieval fantasy, where the world is converting from sorcery to steel. Mages of great power are less common now than in bygone days, though magical traditions (and magical beasts & challenges) still stand at the fringes of the world. Most people are aware that magic exists, but few truly understand it. The gods are varied from locale to locale, though the worship of the Septinity (The Father, The Mother, The Warrior, The Smith, The Maiden, The Crone, and The Stranger) is by far the largest of faiths. Other planes of existence are theorized (heaven, hell, feyrealm, world of shadows, etc.).

The campaign is intentionally not set in a known campaign setting as I wanted a clean slate to draw upon. The Old World is a low- to medium-magic setting where magic is known but is uncommon to rare, depending on where you are. Details on the Old World are intentionally left to your imagination. Each player will build a little piece of it (or not) with their background story.

We'll be using the True20 gaming system (T20) which is very similar to the d20 3.5 system, and it provides for a great deal of customization. It will be very important for everyone to work together to maintain game balance.

The True20 rules are open gaming content and I have posted them online for your reference. For convenience in linking I have created the following shortcuts:

This category has the following 6 subcategories, out of 6 total.

Pages in category "The New World"

The following 49 pages are in this category, out of 49 total.

Media in category "The New World"

The following 10 files are in this category, out of 10 total.