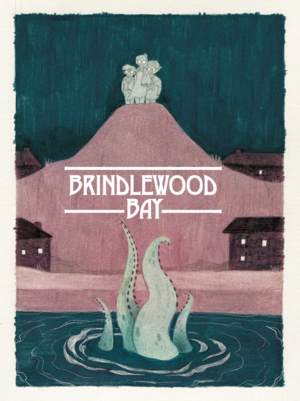 Brindlewood Bay is a roleplaying game about a group of elderly women—members of the local Murder Mavens mystery book club—who frequently find themselves investigating (and solving!) real-life murder mysteries. They become increasingly aware that there are supernatural forces that connect the cases they are working on and, in particular, a cult dedicated to the dark, monstrous aspect of the goddess Persephone will come to vex them. The game is directly inspired by the television show Murder, She Wrote, but also takes inspiration from the works of H.P. Love- craft, ‘cozy’ crime dramas, and American TV shows from the ‘70s, ‘80s, and ‘90s.”

The tone of this game bounces between the cozy and the creepy. Most of the time, it will be fairly lighthearted, but occasionally it will get very dark and menacing. Some kitschy, campy humor is permissible here—and very much in keeping with some of the game’s inspirations—but above all, your characters should take everything they do very seriously, even if we’re having a bit of a laugh from time to time.

The following 7 files are in this category, out of 7 total.