Outside the workshop, it is endless arctic waste. The workshop is hidden by a magical cloud of steam and fog. Powered by geothermic energy that provides power for the workshop. Closer you get to the core, the most whistling you hear. Lots of singing whether or not the singing is "voluntary". Elf groups who don't sing are penalized.

Government
Power flows to the heads of the most marketable departments with decisions made through a middle-management-ocracy
(Symbol) Elves who display exemplary workmanship (or other such qualifying traits) are given a golden braided cord worn on the outside of the uniform on the right bicep. Elves that give poor performance are required wear jingle bell anklets.
Architecture
Contrast between Facade and Function- working areas are unpleasant, but do reflect the pecking order- higher value castes get nicer digs
(Symbol) Uniforms reflect station and working.. Elves in public view have multiple sets of uniforms as oppose to common laborers.
Death
Elves who die on the work floor are considered to have died an honorable death.  Dying through illness or other means is a crime, except in old age. Dying of old age is only acceptable in certain, more privileged castes. Debt is passed on to the workshop.
(Symbol) Elves that die honorably their family are presented with a a special wood carved reindeer those who die other ways are sent debt collection missives.
Naming
Elves have nicknames in family units, otherwise they are referred to by their caste job, worker number (determined sequentially), and workshop name. EX. Cobbler 108 Soles Department.
(Symbol) Scripted object of art that is kept hidden but ties their True Name to their Family Lineage that goes beyond the history of the workshop
Justice
Judgments are based on class. For example if a lower caste member does harm to one of higher class their punishment is more severe than if they harmed someone of the same class. Each workshop has its own system of justice.
(Symbol) The highest managers in a workshop traditionally carry a baccalum- a staff historically used as both a rod of authority and physical punishment, though it's rarely used that way anymore- rarely, painted in candy-cane stripes
Love
Elves need permission from workshop to marry between classes may escalate to Santa.
(Symbol) Couples who marry for love participated in a hand tying ceremony. Both portions of the couple craft a ribbon, and that ribbon is then incorporated in some fashion into their clothing.

Occupation—In charge of the cafeteria
Tradition: Love
Rebellion—Allowing the elves to die with dignity and perhaps a retirement.
Tradition: Death
Identity—Too young for Mr Claus.

Relationship to Hero—Personal valet to Mrs Claus
Occupation—Keep a registry of the names.
Naming
Identity—Elf. Prim and Proper. Woman.

Santa tries to punish Mrs Claus by jingle-belling her. She refuses and in the fracas they wrestle with the glittergun, shooting Santa dead. Fig grabs the gun and shoots Mrs Claus. 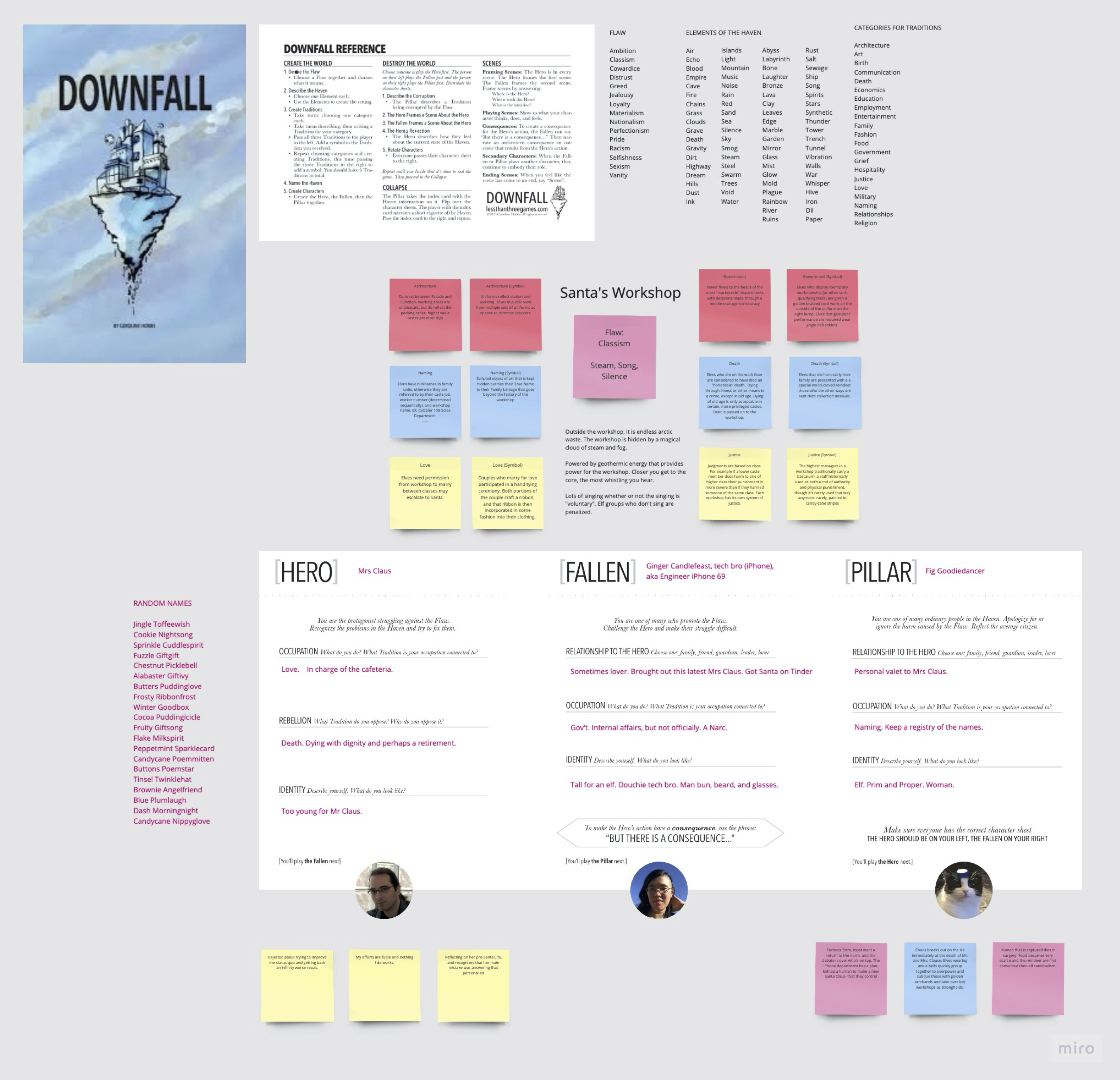 This category currently contains no pages or media.