Game: Monster of the Week 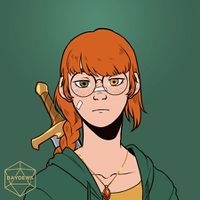 Elizabeth "Betty" Evans, current vessel of The Champion of Humanity.

For 13 years Betty was a normal girl living a pretty normal American life. Her parents love and care for her, though are incredibly busy with their jobs so she's a latch-key kid. Even after falling into a week long coma during a Geometry class, when the old Champion died and hundreds of lives entered her body as the new Chosen, she still leads a pretty normal life. Her favorite subject is History (though she is kind of cheating a bit now), she's involved with the literature and chess clubs, and likes to skateboard in her free time (which is pretty lacking nowadays, but at least she gets to practice when going monster slaying).

The Champion of Humanity is an ancient line of heroes dating back to the age of "fantasy". Much of the modern world has forgotten about this protector, but the names saviors past carried the title and live on in myths. Betty has the lucky job of carrying this title now and while this would be pretty overwhelming at least she has a whole lot of encouraging helpers living in her brain. Oh, and lets not forget about that sword. Every Champion needs a Weapon, right? Able to materialize out of thin air as needed, Betty's Weapon takes the form of a large, golden sword. Every weapon also has a name, but they haven't really figured that out yet. Robert works for now, and yes he talks. 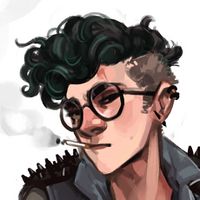 Dante Perez, Servant of the Brotherhood of the Black Pharaoh

Dante is an initiate in the brotherhood, whose goal is to serve Nyarlathotep—messenger of the elder gods—by destroying false beings, cults, and monsters doing work not sanctioned by the elder gods.

Dante is a capable young man in his 20s who has a need for guidance from a strong hand and thus is a perfect member of the cult, uh, brotherhood. He enjoys making the world a safer, better place through the workings of dark magic, which he is keenly proficient with. 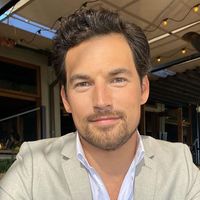 Why: There ain't no Ghoul King here, they said.

Secret: Where it's buried. And don't ask what 'it' is either. Just know that it's too dangerous not to be buried. (And boy did it hurt to bury it instead of hooking it up with a buyer...)

If anything, tiny protective charms. But that's an if. "I was told these runes work this way if they are put out that way..." 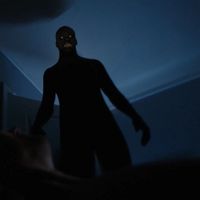 When homo habilis started the first fires to warm and light the nights, Sceadugenga was born, flickering into being at the edge of that circle of light. When those proto-humans looked out into the darkness and worried about what might be lurking there, it was Sceadugenga they feared even if they didn't know it.

Sceadugenga existed as a hunter. Wherever the interplay of light and dark created sufficiently large shadows, Sceadugenga would track their prey, crawling up their skin and sucking away everything which made them them. As Sceadugenga was a shadow, the people Sceadugenga fed upon became shadows of themselves. Over millions of years, Sceadugenga left a trail of misery. Usually, Sceadugenga passed unnoticed, just leaving a trail of hollow, souless people in their wake. From the early hunter gatherer tribes, to the first cities, like Gobleki Tepi, Sceadugenga was just a mysterious drain.

As Sceadugenga got stronger, smarter, and more real, they would sometimes manifest more strongly and become the inspiration of a monster of legend- their current name is from Old English, and they think they may have inspired Grendel. Today, they're at their strongest, even able to manifest a solid form under the soft interior lighting of the modern world. They're not just a shadow cast by human society, but in the right corners, they can even be a remember f it. The hunger, the need to hunt, never goes away, but the desperation of it- that's gone. There are people who deserve to be hunted. There are people who do not. Sceadugenga preys upon the latter.

Why: Waycross is a place where Sceadugenga can be a person, a member of the world. The line between friend and prey is how you feel about them, and there's plenty of both in the world.

Secret: There were, once, other shadow people, a society even like the one Sceadugenga is trying to join now. They fear what will happen if other hunters return.

This category has only the following subcategory.

The following 4 files are in this category, out of 4 total.