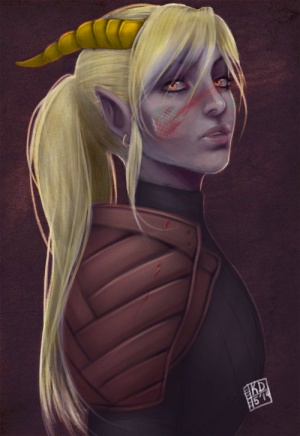 I am the only being with dragon lineage that is somehow tied to beings called gemlings.

Quick to Fight (Racial Power)
At the start of each battle, roll initiative twice and choose the result you want.

The breath weapon power lasts for a single battle only.

Failing a death save cancels any breath weapon spells you have active.

When you attack with a chain spell and get a natural even roll, you can roll another attack against a different enemy within range. Keep on rolling attacks as long as you get even rolls and don’t run out of new targets. Each enemy can be targeted only once.

All sorcerers can cast the dancing lights spell as a standard action. Unlike the wizard’s light cantrip, the sorcerer’s dancing lights spell produces a number of varicolored light globes that bloom within 5 to 30 feet of the sorcerer every two to five seconds. The sorcerer has very little control over the exact location or illumination provided by the lights, meaning that they can occasionally be used for dramatic plot purposes.

Once initiative has been rolled and a battle is underway, a sorcerer can spend a standard action to gather magical power, preparing themselves for casting a double-strength spell with their next standard action. Gathering power is loud and very noticeable.

Sorcerers who want to gather power before initiative has been rolled can go through the motions but won’t get any benefit from the act.

When a sorcerer gathers power, it does not count as casting a spell; you can gather power without taking opportunity attacks.

In addition, because you spend your standard action to gather power, you generate a small magical benefit. Like many of your powers, this benefit is chaotic rather than perfectly reliable, so you must make a random check to see what benefit you get. Roll a d6 and consult the appropriate table below.

If you get a benefit that deals damage to enemies, you can choose the type of damage (cold, fire, lightning, or thunder).

If you do not or are not able to use your next standard action to cast a sorcerer attack spell, you lose the power you’ve gathered. You can use another standard action to gather power again, but the spell you eventually cast will still only do double damage.

You can spend your move actions and quick actions any way you like after you gather power and before casting your next empowered spell. Yes, once a battle has started it’s possible to perform the magical firefight trick of gathering power while hiding to the side of the cave entrance, then jumping into the cave opening on your next turn and blasting with the empowered spell.

If you’ve gathered power for a spell that deals ongoing damage, the ongoing damage is doubled the first time it is dealt, but not on subsequent rounds, if any.

Some sorcerer spells deal damage of a random type. If it matters for the situation, use a d4 to determine which type of damage the spell deals.

Your rolls to re-use breath weapon spells during a fight gain a +2 bonus.

Your style of sorcery emphasizes close-range fighting. There are two advantages and one possible drawback to your style.

You can use ranged spells while engaged with enemies without taking opportunity attacks.

You use your Constitution modifier instead of your Charisma modifier to determine the damage you add to all your sorcerer spells.

Once per battle, you can reroll one of your lightning fork attacks rolls.

When your ranged attack targets an enemy who is engaged with an ally, you have no chance of hitting that ally.

You may affect an additional target with this spell.

You can cast any spells you know as rituals.

Actress +3
Before Amsah was born, her parents were elite socialites. But because of her "deformity", the elite circles began referring to her as "lizard girl". This shamed her parents and they decided to move far away and change their names. They could do nothing to hide their daughter's abnormalities so they used it to their advantage by telling everyone that she was a descendant of the metallic dragons of old. At the time, they weren't sure why she looked like she did. No one in her family had any of these traits. But it made a great story. A man who was traveling through the area saw Amsah and wanted to make her famous. He had some pull at the studios and knew they were looking for a fresh idea for a new show. So he pitched the idea to her parents and, due to their extreme desire to return to their former life, they agreed to give Amsah over to the studios and they would receive a portion of her earnings. No one remembered much about the old stories except for the fact that the dragons protected them and so Amsah was portrayed as a child hero who would protect the innocent and fight for good. Her show ran for 10 years. At 16, Amsah developed a profound drug problem that couldn't be overlooked anymore and she was let go. Her parents has little to do with her after she was given to the studios but were paid handsomely for her success.
Assassin+3
Background history
Dragon Shaman +2
While on a drug bender a few years after being kicked off the show, Amsah was wandering aimlessly in some town she didn't even know the name of in search of her next score. She stumbled right onto the heels of a very large, finely dressed, hooded figure. This figure was adorned by scarves and jewelry with intricate designs in silver, gold and platinum. The robes were white with a opalescent quality to them and were so long that they dragged on the floor. The figure looked at Amsah and audibly gasped. They waved their hand over her head and she passed out cold.

When she came to, she was in a room with similar decor as to what the figure was wearing. There was weird writing on the walls and a large symbol of the outline of a dragon head in gold. Around it, was writing that Amsah could not read. There was an elf woman standing over her. She felt no effects of the drugs, no hangover, no urges, just peace. She was clean and her clothes had been replaced by white robes made of the finest cloth. The elf woman told her she was at the Temple of Divine Radiance. Here they honor, study and train in the ways of all the metallic dragons. They combining this knowledge and power to fight evil. They are an extremely selective group and keep to the shadows. If anyone has heard of them, they only hear rumors. The Shamans of the temple find the people they want, people do NOT find them. The Elf introduced herself as Kuliza, one of 4 elders. Kuliza said that they were looking for her ever since she got kicked off her show. They knew she belonged with them and they wanted to train her. Amsah at first didn't understand but Kuliza said they recognized the horns and the eyes as an indicator that she was of draconic heritage and she needed to be here. She was free to leave if she wanted but they would very much like to train her. Amsah having no where to go and feeling better than she had in ages decided to stay and learn the ways of the metallic dragons including their magic. Amsah never knew she was a sorceress and had a natural penchant for magic. The Dragon Shamans helped her discover and harness that magic. The Shamans made money by offering their "services" to very powerful people who paid them a lot of money. They were also very talented clothing and jewelry makers, selling their wears under the pseudo name of Metallica. There were roughly 30 people in the Temple while she was there; 4 elders, several teachers/masters, a few warriors that protect the temple and 8 students of which Amsah was 1. Her days were long but rewarding. She never even thought about drugs. One day, one of the masters brought a "special guest" to the Temple, Malentine, a former student who had moved off into the world. Malentine saw Amsah and was drawn to her. They became close friends while she was there. Before she left she told Amsah to come find her when she was finished with her training and gave her a large purple flower. She told her to put the flower in some dirt and Malentine would know where she was.

Gown of Poison Protection
Body. '
Resist Poison 11+
A gown composed of black dragon scales
Ebony Cloak of the Raven
Mantle. Likes playing minor tricks and pranks
Recharge: 16+
+1 PD
You may subtract 1 from the natural roll of one of your attacks
A long cloak lined with black raven feathers with a midnight blue interior
Wand of the Mage's Invisible Aegis
Weapon. Hums tunelessly
Recharge: 16+
+1 attack and damage with spells
When you use this wand, you can cast the wizard’s shield spell, with a level no higher than your level
A crystal wand with a basket hilt made of blue ribbons