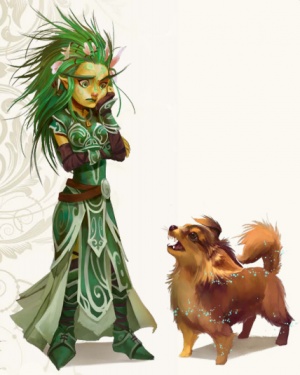 Informant to the skyrates. While laying low and going generally undetected for my own reasons, I overhear a lot of information. I feed this information to the skyrates, hoping that (if I can provide valuable enough information about the important families of the court) I can eventually ensure safe passage and protection for myself and my loved ones to the gnome colonies on the skylands.

Confounding (Racial Power)
Once per battle, when you roll a natural 16+ with an attack, you can also daze the target until the end of your next turn.
Minor Illusions (Racial Power)
As a standard action, at-will, you can create a strong smell or a sound nearby. Nearby creatures that fail a normal save notice the smell or sound. Creatures that make the save may notice it but recognize it as not exactly real.

You have a small animal or beast that accompanies you on your adventures. Use the rules from the Wizard’s Familiar talent with the following differences:

Counter-bite
Each battle, if your companion is close to you, it bites the first enemy that hits you with a melee attack after that attack, dealing {{#var:level}}d4 damage per level (no attack roll) to that enemy.
Scout
Once per day, your familiar can separate itself from you and make a reconnaissance run of an area or location. Roll an easy skill check for the environment to get your familiar to scout unseen.

No chance to hit allies on fumbles.

You can change your favored enemies by meditating when you take a full heal-up.

Add a total of 2 points to backgrounds you already have, or choose 2 points of new backgrounds that make sense for your character. You still can’t go over the 5-point-per-background maximum.

Boom-blade
Weapon. '
Two-handed spear.
Critical strikes turn all die to d20's
A mechanical spear found in ancient ruins that uses charges to activate the critical effect.
Quiver of Consumption
Misc. Over-analyze things
Holds "infinite" arrows
Create normal arrows and may turn exceptional components into special arrows.
A quiver made of exotic hides
Collars of Loyal Companionship
Neck. You take on some of the personality traits of your familiar or ranger pet
+1 to saves
Once a day, your pet or familiar turns into a dire version of itself that used the animal companions table at one level lower than you are.
A matching pair of collars lined with small studs and spikes.