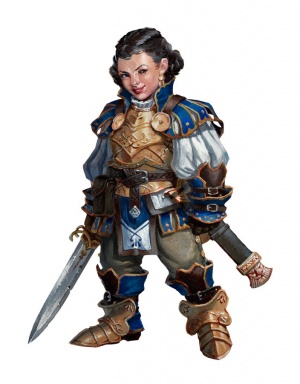 Once a fortnight, I dream of a confrontation between ancient dwarves and ancient elves. These dreams are from the first person perspective. I do not remember these dreams when I wake up.

That's Your Best Shot? (Racial Power)
Once per battle as a free action after you have been hit by an enemy attack, you can heal using a recovery. If the escalation die is less than 2, you only get half the usual healing from the recovery. Unlike other recoveries that might allow you to take an average result, you have to roll this one!

Note that you can’t use this ability if the attack drops you to 0 hp or below. You’ve got to be on your feet to sneer at their attack and recover.

You start with nine recoveries instead of the usual eight.

Whenever an enemy attempts to disengage from you, it takes a penalty to its check equal to your Dexterity or Constitution modifier, whichever is higher.

The penalty doesn’t apply if you are stunned, grabbed, or otherwise incapable of making an opportunity attack.

Once per battle, make a fighter melee attack as a free action after one of your melee attacks drops an enemy to 0 hp.

Once per round when the escalation die is even and an enemy misses you with a natural odd melee attack roll, you can make a basic melee attack dealing full damage against that enemy as a free action. (The attack can’t use any limited abilities or flexible attack maneuvers.)

Once per round as a free action, roll a normal save (11+) to intercept an enemy who is moving to attack one of your nearby allies. You can pop free from up to two enemies to move and intercept the attack. If you are engaged with more than two enemies, the others can take opportunity attacks against you.

The moving enemy makes its attack with you as a target instead. If you’re wearing heavy armor and the attack hits, you only take half damage.

Now you can reroll both 1s and 2s with deadly assault.

You can pop free from up to two enemies when using Skilled Intercept.

Acrobat Extraordinare +3
After creating her own simple craft, Foster made use of her exceptional physical skills and gained an apprenticeship with one of the most famous daredevils along the coast. Soon she was performing death-defying stunts in midair and attracting audiences of all creatures.
Always Invited to Certain Parties +1
Foster is from a prominent dwarven family, and dwarves are still widely respected across the world. She's not popular, exactly, but still gets invited to large events due to her last name. To leave her off of an invite list would be insulting at best, and trigger an inter-family feud at worst.
Crafting and Repairing Aircraft Devices +1
She was raised to create aircraft, and while she's not a journeyman, she is quite skilled at making and repairing them.
Crowd Favorite +1
She's loud, brash, quick tempered, and performs death defying stunts in midair. She's actually really fun to have at parties!
Gloves Off - Throw Down +2
Listen, sometimes you're three ales in, someone cracks a short joke, and you just gotta punch.

Indigo Scarf-blade
Weapon. Prone to being extravagant and over-the-top
+1MD
With a command word, can change into a +1 Longsword
An indigo infinity scarf that shimmers like small scales in bright lights

A dwarf with no talent
Foster was born into an extremely prominent dwarven crafting family, the Ironforges. Her father, brothers, and most family members were innately skilled at crafting the most delicate, graceful, and indestructible flying machines, cargo ships, and air taxis available. Having mastered the art long ago, and continuing to excel across generations, the Ironforge family expected their youngest child to continue in the tradition.

Foster, however, was simply... adequate. While she could certainly create a basic aircraft and repair them with ease, she never showed the raw talent the rest of her family seemed to possess. Although her father used extremely... persuasive... training methods, Foster still never rose to the rank expected of her in dwarven society. Instead, she found an affinity for Hell's Carnival and the acrobatics there. She eagerly joined the troupe, and devoted more and more time to performing, much to her father's chagrin. After yet another screaming match, Foster left her clan and traveled to the surface, her hotheaded temper and stubborn refusal to admit defeat serving as her motivation to strike out on her own.

And she did! After creating her own simple craft, Foster made use of her exceptional physical skills and gained an apprenticeship with one of the most famous daredevils along the coast. Soon she was performing death-defying stunts in midair and attracting audiences of all creatures. She happily let fame go to her head and soon came to shore up her wounded self-esteem with the accolades and fawning praise from all who came to see her show. Most of her money went down her throat in whiskey and beer, of course, but she managed to make a few more intricate aircraft to keep improving her shows. And of course, her near-nightly barfights with local toughs made her audiences even more eager to see her next show.

Foster had no plan or direction other than, "Keep drinking, flying, and performing. Look at me now, Dad!" until she signed on with the motley crew of adventurers. Now, having sworn revenge against Malatyne and increasingly bothered by the apparent mystery of her dwarven heritage, she keeps a nervous eye out for the Dwarf King. She's not sure what he wants with her, but she doesn't like it. And besides, her rather simple mind is wholly focused on protecting her friends and killing Malatyne. Once that mission's done, then maybe she can see what the hell is going on with the dwarves.