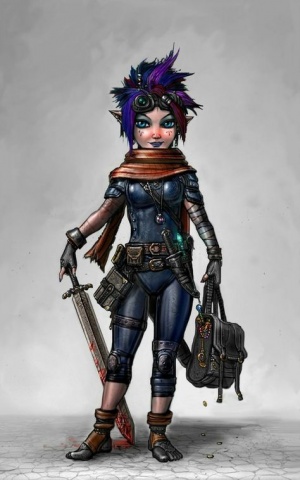 I can speak to the 'souls' of machines.

Confounding (Racial Power)
Once per battle, when you roll a natural 16+ with an attack, you can also daze the target until the end of your next turn.

Minor Illusions (Racial Power)
As a standard action, at-will, you can create a strong smell or a sound nearby. Nearby creatures that fail a normal save notice the smell or sound. Creatures that make the save may notice it but recognize it as not exactly real.

Bardic songs last for one or more rounds and end with a final verse that carries a big payoff. Although magical, bardic songs don’t count as spells; they don’t force the bard to suffer opportunity attacks from engaged enemies, and they can’t be canceled by effects that can cancel spells. In fact, bards can cast spells while in the middle of singing a bardic song.

Each song specifies what type of action starts it. To sustain it during the next round, it requires an action and a d20 check against its sustain target. If successful, the song can continue with its sustained effect for that round. (The next round will require another sustain check.) If your attempt to sustain a song fails, the song’s final verse effect resolves immediately, and then the song’s power ends. You can start another song on your next round.

You don’t have to try to sustain the song at the start of your turn. If you choose not to sustain a song, its effects end immediately and you choose whether to use the song’s final verse effect in the current round or to start a new song. You can’t do both.

Some songs have an immediate effect that happens each time you start or sustain the song. Others have effects that continue throughout the entire round.

Most songs stop when a bard is knocked unconscious, silenced, or stunned. Having your song stopped this way prevents you from getting the final verse effect.

You can only sing one bardic song at a time. If you are singing a song (or spend an action to try to sustain a song), you can’t start another song that round.

Bardic songs are loud, and cancel any of stealth effects you may have.

Bards use battle cries to encourage, inspire, warn, and magically aid their allies. Battle cries are triggered by flexible melee attacks. The bard makes a melee attack and is able to use a battle cry that corresponds to the attack’s natural result, sometimes whether or not the attack hits.

Bonuses provided by battle cries can help a bard’s allies but not the bard.

Bards use arcane spells that function like those of other spell-casting classes. Some spells are daily, some recharge, and others are at-will.

Unlike most character classes, bards use two different ability scores for their attacks. Their melee and ranged weapon attacks use Strength or Dexterity, while their spells use Charisma.

Choose another spell-casting character class. You can choose one spell from the spell list (but not the talent list) of that class, of your own level or lower, as an extra spell you know how to cast. You can even take its feats up to your tier, if it has any. You may only choose from the spell list—not from talents.

This spell is a bonus spell, not included in your bard class count.

You cannot take this talent if you have taken the Battle Skald talent.

You can choose an extra bardic song or bard spell at the highest level you know.

You can cast any spells you know as rituals.

You can use your Charisma as the ability score that provides spell’s attack bonus and damage bonus (if any). Other ability score references remain unchanged.

If the spell is a wizard spell, you also gain three cantrips of your choice from the wizard. You can cast them like a wizard who lacks the Cantrip Mastery talent.

If you choose a spell from the sorcerer class, you also gain the sorcerer’s dancing lights class feature.

On a hit, the effect that damages the target when it misses is now save ends.

Spannermajigger
Weapon. You have trouble remembering proper nouns for things
Light Mace
Can convert into any tool you need at the time. Reduces the time to do a manual task by 1d4 X 10% and gain +! to +3 on your crafting check based on RP'ing.
A rod with multiple gears and dials that can be quickly spun to create a variety of tools and shapes.
Light black dragon-scale armor of poison resistance
Body. '
Light Armor
Resist Poison 6+
Vest and cavalier leggings made of black dragon scales