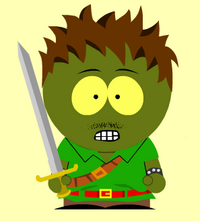 Fell Calls: Tolmek can use the musical abilities of the bard class, though they are made as fell calls, not songs. In addition, he gains the following:

Description:Standing well above six feet tall, and weighing in at a modest 280 pounds is Tolmek. He has a generous amount of spiny hairlike protrusions from his scalp, which he likes to keep beaded with dyed wooden purple, red, and yellow. His eyes are a rather disturbing (to humans not used to Trollkin) white appearance and there are red blotches mottling his chin, left cheek and forehead. When unarmored, you can usually notice a large collection of welts and bruises from his close encounters with walls, doorways, and other objects.

Above all, Tolmek values honor and sacrifice to his bloodline and trusted friends. He appreciates audacity and looks toward cowardice with disdain. He tends to be clueless when it comes to human traditions and etiquette, but his strong presence allows him to get away with a lot of the minor things.

As a teen, he was conditioned to be an athlete in the Trollkin games, specializing in the Sazlik (Sheep Kick).

Religion:He is a very devout follower of Dhunia, and is very pensive about the way he will interpret events around him. He refuses to take sides immediately, trying to decide "What would Dhunia do?" first. This is, unless of course, a force is directly conflicting Dhunia or his kith.

Goal:He was sent as an analyst of battle tactics of the human nations, in order to keep the trollkin informed of current technological advances on the battlefield. He was told not to return for good until he has plenty of information.

Battle Tactics: Takes the front line without thought, and protects those that ask. He prefers using his hunting spear, but isn't shy to whip out the battleaxe if he's forces to drop the spear. He tries to use his strength to his advantage in ways that aren't just dealing damage, employing bull rushes, trips, and disarms when he feels it necessary. Upon gaining fell caller abilities, he will try to instill terror in his enemies, and take that opportunity to rout the enemy. He is too clumsy to care about protecting himself, and often considers a stong offense is the best defense.

Dook - coward, nowhere to be seen during battles (he doesn't realize Dook's tactics, yet)


Jamison - not at all pleased with his weapon choice. Tolmek views cleft-bladed weapons to belong to people who desire suffering in others, and who are followers of the Devourer Wurm (no matter what they might say). Tolmek is still convinced that he's compensating for something, but won't bring it up again.


Caitlyn - Although very slight of frame, she has a lot of presence, and the audacity to approach danger even when gravely wounded. We do have our differences in what we consider honorable combat.


Tirotin - He seems really knowledgeable. I wonder if he has any knowledge of tactics.

Predominant Fell Caller levels, with possible levels in fighter (thug variant) and one or two levels in Barbarian.
Track feat, with a respectable survival skill (or urban tracking with gather info)
Possible feats: