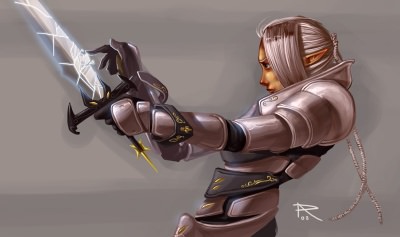 He puts the Dim in Dim Door. —

"An Elf, eh? Well, we'll see what we can do about that pretty little face o' yers."

An Elf. That's what most people see him as. And rightly so, as he is as such. But they rarely see past that. Past the fact that he is different. Many people see Malyth as an outsider; as an intruder. This may be the case, but that doesn't mean he wants it to be. No, rather then living here, with these people whom he can not speak with on a normal level, whom he can not befriend, he wishes to go home. Back to the forests of The Way, and his childhood so long ago.

It isn't that Malyth is an unplesent person. Rather, he is a good man. But, he is older then any human will ever live to be, and still young be the standards of his race. Those who raised him as a child have long since died. They were buried and turned to dust many decades before he met the people he is with now.

To go home would be, in every way, a blessing to this man. It would be the gift he has wanted all his life, and he will not rest until he can.

All he has to remind him of what was once the place of his existence is Bal'rez, the sword that speaks. It whispers to him in the corners of his mind, telling him the things he needs to know when his own will falters. He still does not know what Bal'rez's purpose is, what its final reward for helping him will be, but he welcomes the sword anyway. It is the one companion he has that will not die before he does, that he will not have to watch grow old and rot in a grave. It is as much a part of him now as his magic is.