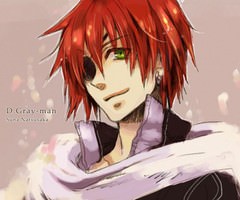 
Special Trait +2 to DC of a fire spell 1x per day; Elemental Resistance +10

Personality Nict shows a happy, agreeable face to the world developed from years of training as a merchant. He is lawful and will follow the spirit of the law as opposed to the letter although he is passive-aggressive to authority figures. Although not malignant, he does have the tendency to hold the expediency of reaching his goals over the value of someone's feelings. He makes quick shallow bonds easily but has a harder time making meaningful connections to people.

Biography Nict Gern is from a family of outcasts. His family has what they perceive of as a "curse". Every once in a while one of the children in their line is born with a crimson eye. He is the latest to have the curse. His aunt, uncle, & his parents are currently the leaders of the caravan they travel which. It has recently bounced back from near disbanding. His parents are responsible for it recovering. Although proud of his parents, he also resents them because their focus has always been the safety of the caravan over the safety of any particular inhabitants, including their own children.

Nict practically raised his sister Sehra (12) & his cousin Sheiah (14). He has a stronger affection for them than anyone else in the world. In turn, they look up to him as more like a parent than a big brother as he is the one that keeps them in line when they get in trouble and take care of them when something goes wrong. He has taken great care to make sure they are on the right path to cultivate the skills needed to be able to live on their own so that they may have the option to leave when they feel they are old enough. Neither of them have the crimson eye although Sehra has shown the family attraction to fire even though she tries to hide it.

He leaves the caravan at 17 to find a new life for himself with a contact he made in one of the caravan's regular stops.

Curse Origin The "curse" that the line suffers from stems from an ancestor who went and fought in a war far in the past. After some incident that he never spoke about, he came back from the wars with crimson eyes. He was quieter and more stoic & could be seen at times just staring into the fireplace on cold winter nights.

Before the war, he was arranged in a marriage. After he returned as he did, the girl's father tried to annul the marriage but didn't have grounds for it according to the village chief. After a few years, the woman gave birth to twin girls. Each one had one of their eyes like their mothers (green) and the other like their fathers (crimson). Yvette had her left eye green and the right crimson. Yvonne had her right eye green and her left crimson. The town circulated with rumor about these children and their odd interest in fire, & they were treated as outcasts by the other children for their odd eyes.

Eventually, when the girls turned 15, they ran away from the village unable to take the ridicule and cruelty of the villagers. Being young and untrained in life in the woods, they would have died in their excursion except fate intervened & a caravan came by. The caravan leaders found the girls cold & hungry & took them in. This group was special. They took in those that others would cast away. Each person who traveled in the group learned a trade in the caravan. Some came & some left at every stop it seemed. The girls quickly leaned the easiest tasks first: taking care of the animals, setting up stalls when they came into towns, finding & collecting water for the community, etc. Eventually they moved on & took the trade of merchants in the caravan.

Yvette & Yvonne and every generation after that have lived & worked at various levels in the caravan. Their line is always small. Only ever having 1 or 2 children in each of the 2 original lines. The crimson eye & draw to fire occurs in a small number of their line every couple generations. Each member with the curse is told to always keep that eye bound under an eye patch and only ever tell those that are closest to them about the eye.