From Drinking and Dragons
< L:PC/Thaddeus 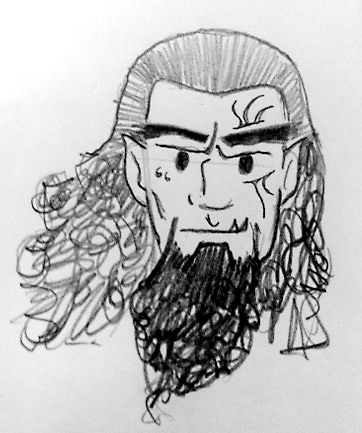 Date of Birth: a little before harvest time, 39 years ago

Place of Birth: "Serpent's Grotto" - a small cave village in Southend, about 30 miles from Slaughter

Many different prison tattoos on arms, back, and torso, and a few on the face. Crooked nose.

A few broken bones, all healed normally except for the nose. Had a bad case of pneumonia one winter in prison, and occasionally gets a bad cough in cold weather.

A result of a non-consensual union between an orc raider and a human villager. He never knew his father, and his mother abandoned him soon after birth. He was taken in and raised by a family of half-orcs by the name of Korogson in Serpent's Grotto. They took in a lot of strays, and the environment was like that of a chaotic and crowded foster home. He left home when he was 15.

Education Taught the basics of reading, writing, simple math, geography, and history in the small village school. Was given a book "The Magic of Faith" in prison and has read it a few times.

Not so much employed, but rather commissioned by a cleric of Toori to bring about justice to those that would otherwise elude it. Being a half-orc ex-con with obvious distinguishing tattoos makes it hard to find a normal job, so to pay the bills he hires himself out as a bodyguard or mercenary. He is trying to find a way to combine his personal mission with a lucrative day job.

Just trying to earn an honest living on the outside. No real opinion on higher concept economics or politics.

A nice composite longbow and chain shirt he kept after killing an attacking orc during an ambush while on a recent caravan-guarding job. Also, a few other common items picked up over the past few months befitting a travelling guard/mercenary. His book and his pipe.

Had a few flings in later teen years, a couple which resulted in the two offspring. Nothing going on currently. "Single and not looking".

Nothing resembling "home" - mostly rents cheap rooms by the week in whatever town he finds himself in, or camps outdoors when necessary.

Currently housed in a cheap inn on the outskirts of Offenox, and looking for work.

None. Doesn't much care for the idea of domesticating animals for no apparent reason.

Skilled at archery. Good judge of character. Pretty decent at noticing things. Appearance and personality can be quite menacing when he decides to turn it on. Can see in the dark. Is fairly stealthy. Also, he has been developing some truly god-given powers recently: easily free himself of bonds, damage undead creatures, boost his fighting skill, create a mark of judgment on somebody, detect items or magical auras, make someone obey a command - and the list is growing.

Grew up as a typical apathetic pan-theist; half-heartedly praying to whatever god he wanted something from at the time. Due to a series of encounters with a kind and fearless dwarven cleric while imprisoned, he has fully embraced the god Toori and has dedicated himself fully to his service. For this, Toori has seen fit to grant him with special abilities that will help with his task of bringing justice to the wrong-doers. He still believes in the other gods, but is now singular in his worship.

Spends an hour each day in prayerful meditation, preferably just after breakfast. He doesn't have much patience for those gods whose ideologies conflict with Toori's, and is particularly disdainful of Balor and Doracin.

While not ashamed of his past, he is truly regretful of the harm he has caused. He seeks to help others either by preventing them from making similar mistakes. Or he will help them through the confession and punishment process. He also seeks to bring about punishment to the wrongdoers that would otherwise evade it. Hopes to one day reunite with his daughter and start making up for being an absent father.

Strive to do good. If you mess up and do bad, do not run and hide from it, for it will forever imprison you. There is true freedom in confession and penance. "Right" and "Lawful" are not the same thing.

Knows that Toori has instilled within him the ability to tell right from wrong, and how best to judge the actions of others in that regard.

While certainly fun, can have its lasting repercussions. Even though he was celibate through prison, he has decided to treat the matter with wisdom on his parole. Only the cleanest whores will do, and then only when they have a secure plan for birth control.

That his estranged daughter is enduring a lifetime of suffering due to his past actions.

His main friend and mentor is Roggo Ironhelm, the dwarven cleric of Toori that visited him in prison. Roggo still lives in Slaughter and continues his work there, including the prison outreach program. Thaddeus doesn't associate with his old friends from childhood anymore - he is done with that part of his life. He is open to making new friends now.

Quite introspective (20 years in prison does that to you). But not overly intelligent.

Justice above all else. Also truth, freedom, honor, and fairness.

Quite happy spending time talking with new people. Becomes restless if alone for extended lengths of time. At least an hour a day spent in meditation/worship. And at least a half hour in a personal exercise regimen. Trains his skills when he can, with a focus on archery. Spends the rest of his time either trying to be social or pursuing his charge of delivering justice.

Admires a good simple design. Some of the tattoos are by his own hand. Is fond of art involving constellations and star maps.

Roggo. Also has grown to admire the generosity and patience of his foster parents Gulak and Matilda Korogson, even though he took it for granted at the time and was a rather unruly child.

Respectful, but wary. Never automatically assumes that something is good or truthful just because it comes from an authority figure. Still, sees it as a necessity to help keep order in society.

Likes a good romp with a whore when the opportunity presents itself. Fond of strong drink, but has seen excess cause impaired judgment in his own life so he stays away for the most part. Will often be seen smoking tobacco from a pipe.

Born, abandoned at 2 months and found/adopted by foster family, raised, left home at 15.

Fathered his son at 16, and daughter at 17. Both from drunken one-night stands.

At 19 committed the killings, was tried and convicted, and started serving the life sentence in the prison in Slaughter, the first 14 being pretty rough.

At 33, heard the news of his 17-year-old son's death, which was sobering, and shortly thereafter started paying attention to the visiting cleric.

At 35 became a hardcore convert of Toori, and spent the next 4 years completely turning his life around.

Up for parole at 39, released from prison after 20 years due to being truly changed and repentant.

Spent the next 10 months re-acclimating to life on the outside, finding work, and pursuing his oath to his god.

Really not that picky, but would rather not have the prison gruel anymore if there is any other alternative. Favorite is venison steak with onions and greens.

Smoking the pipe, gazing into the sky and contemplating things deeply.

Often heard murmuring to himself, mostly not aware of it. Finds great humor in slapstick comedy, especially when unintentional.

Although mostly poor, he helps people with his actions whenever he can. Has a special place in his heart for unruly youth.