Brennel Flippins is a fashionable and charming halfling, living the life of an adventurer in Lone Rock City until a heist turned ugly at the last minute. While he successfully found an alibi, he, Roscoe, and others involved left Lone Rock City to return when things had blown over.

One day while hunting with his friend Shep in the woods, they came upon a dire weasel. The weasel, sensing the weaker enemy latched onto Shads and almost lethally wounded him. After finishing off the weasel, who had latched himself onto Shep, he checked to make sure Shep was okay. As Shep lay there bleeding, Brennel wept and held a dying friend in his arms. He suddenly felt infused with a divine power (cure minor wounds from Shep) and mimicked the spell he had seen Shep cast numerous times, taking Shep's holy symbol in his hand.

Shep's bleeding stopped, and Brennel thanks Brandobaris for giving him the power to save his friend. After a week of keeping it to himself, guilt caused him to tell the temple clerics what happened, in case his ability had harmed Shep in a way he couldn't see. 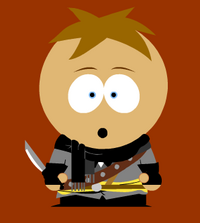 Steal Spell: On a successful sneak attack, Brennel can choose to forgo dealing 1d6 points of sneak attack damage and instead steal a spell, or the potential to cast a specific known spell, from his target. If the target is willing, a spellthief can steal a spell with a touch as a standard action. He can choose to steal up to 2nd level spells.

The target of a steal spell attack loses the indicated spell from memory if she prepares spells, or an equivalent spell slot if she is a spontaneous caster. A spontaneous caster also loses the ability to cast the stolen spell for 1 minute. Brennel can decide which spell to steal, otherwise the DM determines the stolen spell randomly. If the chosen spell isn't available, the chosen spell or spell slot is determined randomly by the DM from those that are available.

At any time, Brennel may only have a maximum total spell level of stolen spells equal to his spellthief class level. If he chooses to steal a spell that would take him over this limit, he must then choose to lose spells such that the limit is not exceeded (16, CV).

Trapfinding (Ex): A spellthief can use the Search skill to locate traps with a DC higher than 20, and he can use Disable Device to bypass a trap or disarm magic traps. See rogue's trapfinding ability (16, CV).

Detect Magic: Brennel can cast detect magic 2 times per day at a caster level equal to his class level.

Spellgrace +1: Brennel gains a +1 competence bonus on his saves against spells.

Steal Spell Effect: On a successful sneak attack, Brennel can choose to forgo dealing 1d6 points of sneak attack damage and instead steal a single spell effect currently affecting the target. A willing target means an effect can be stolen with a touch as a standard action. Brennel can choose which effect to steal, otherwise it is chosen randomly by the DM. A spellthief can't steal a spell effect if its caster level exceeds his class level+2(6th level).

Brennel retains the spell effect for 1 minute per class level (4 minutes), or until the duration of the effect expires, whichever comes first. Afterwards, the effect returns to the original creature. A spellthief can only gain the benefits of a spell effect that could be cast on him by the original caster. This means no personal spells, or spells that can only target animals. However, a non-transferable spell is effect can be supressed for 1 minute per class level (4 minutes). This ability doesn't work on spell effects that are immune to dispel magic (like bestow curse) (16-17, CV).

Steal Energy Resistance 10: On a successful sneak attack, Brennel can choose to forgo dealing 1d6 points of sneak attack damage and instead gain some or all of a target's resistance to an energy type. A willing target can be stolen from with a touch as a standard action. Again, if the chosen resistance isn't present, the DM randomly decides it. The resistance of the create to the stolen energy lowers by 10, and the resistance gained by Brennel increases by 10, which cannot stack with itself, nor with resistance from temporary effects. This resistance to energy lasts 1 minute, and then returns to its owner. A creature that is immune to a resistance still imparts its resistance, but instead doesn't lose any immunity to the energy.

Brennel can use this repeatedly, but must choose a different energy each time.

Absorb Spell: To be updated.