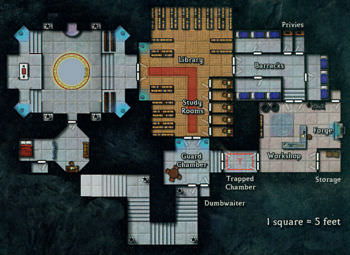 Map of the Rabbit Hole

This area seems to be a research laboratory for the creation of the Box of the Void.

In the corner of each landing stands a statue, carved to resemble some elven hero of times past. They do not animate as you walk by but you feel their eyes silently judging you. At the bottom of the stairs is a wooden door, smashed in by Dmitrii.

As you step inside you recognize this room as a guard chamber, and everything in the room seems to be in good repair. A table with three chairs sits in the corner next to the door and two everburning torches hang on the wall opposite you. There is a small rise of stairs to the side where a set of double doors leads down a hallway. Stepping further into the room, you see that a fourth chair sits on the ground, turned over, and you also see a dumbwaiter on the wall next to the door you came through.

The control device for the dumbwaiter stopped working centuries ago. The shaft is only large enough to fit a tiny creature, or a squeezed small one. The shaft has been magically carved out of the stone and it goes up further than any one can tell.

Along the walls of this hallway formerly hung tapestries depicting scenes of everyday elvish life in the forest. They are in the possession of Dmitrii.

As you enter this room you are overwhelmed by the smell of smoke wafting up from beakers and test tubes. Several tables hold various implements of magical study and there are supply cabinets and barrels. Along the far wall is a magically hot forge, with blue fire that radiates heat across the room.

The barracks have been abandoned for almost a decade now. Only one of the rooms has been used in the last few centuries.

As the door slides open, your eyes are filled with a sea of books, with row upon row of shelves filled with tomes. Scanning the titles on the shelves, you see that the majority of them are in elvish, with the occassional Draconic, Dwarven, and Fiendish. There are also study rooms available for private studying.

As soon as you enter the room the hairs on the back of your neck rise. The center of the room is slightly raised and in the center of that is an ornately crafted summoning circle that is inlaid with gold and platinum. As a later addition, written in elvish, fiendish, dwarven, and common is the phrase, "Step no further, lest ye unleash death upon the world." On the opposite side of the room sits an altar to Mystra. There are again three statues of elven heroes and they seem to not be animating. There is a dais in one of the areas that should have a statue, and there was a game on it.

Once the game was solved, a cryptex was revealed. The opening phrase for the cryptex was "Mondar" and inside it contained what appear to be plans for creating the Box of the Void.

Each day, arcane energy must be placed into the altar to maintain the imprisonment of whatever is being held.

The private room has been the home for Winslow for the last nine years, after Dwrim Valhig died. In this room were the belongings of Winslow.