From Drinking and Dragons
< LRC:Vaeriasa 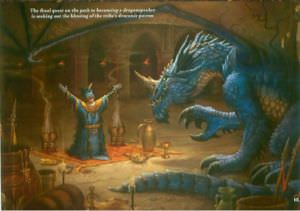 Among the tribes of the Seren Isles, roaming from Totem Beach to Barrier Peak is the tribe of Molten Purity. They act as tinkers among the barbarian tribes though other tribes know well they are fiercely protective of their mines and sacred fires. Majak’aryte the blood cleaver gathered up all his children that took up smithing to help the other tribes guard the dragon continent from intrusion. This canny brass dragon took from his hoard the weapons he had acquired from ally and enemy during his wars on the outer planes. Majak’aryte bid the tribe to copy and trade them amongst the tribes when able.

This was when the feud with the White Wanders started and continues only interrupted by wars with elves and men intent on reaching the dragon continent. The White Wanderers long ago played false in trade and stole some of the weapons from Majak’aryte’s hoard. The elders of Molten Purity teach that hidden amongst the mystic shrines that the White Wanderers protect lay the sacred artifacts of their patron.

Ist'vaech was born of a family with a long history of dragon speakers. It was no surprise then that in her warrior training and jungle ambushes she displayed the perception of dragons. When the dragon speakers first took Ist'vaech amongst them they thought her odd reactions to the sacred fires proof of strong magic. Unfortunately as they pushed her blood to fire her magic cooled and even her left eye leached to white-blue.

It was apparent to the council of dragon speakers that she was proving herself blood of the white and not brass. Many feared that she was a spy for the White Wanderers but none advocated her death. Instead she was banished and forbidden to return unless marked by one of the lost tribes. The only memento she has of her family is the dragon bone bow that her father gave her as she left the village. Complete lack of world knowledge starts here...er, really you'd have to tell me where to integrate it with FR since its all Eberron stuff. Working on quirks and family.

I've done some reading tonight and I think that the Moonsea region of Faerun is a good place for Ist to call home, specifically the Dragonspire Mountains. The Moonsea area is a wild frontier-like area, where the goodly races push into new territory, survive by the sword for a few years or decades, and are pushed back again by the evil races that live there.

I'm emailing you a PDF primer of the Moonsea region from the Forgotten Realms Campaign Guide.