From Drinking and Dragons
< LRC:Wolfdale 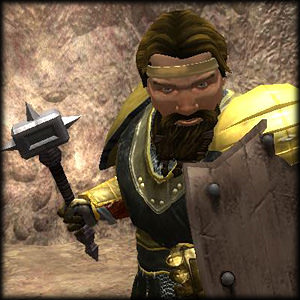 Arcane Channeling (Su) As a standard action you may channel a spell into your weapon and make an attack with that weapon. If the melee attack is successful, the attack deals damage normally; then the effect of the spell is resolved.

Quick Cast 2/day you may cast a spell you know as a swift action.

Armored Mage (Ex) May wear and cast in light and medium armors, and heavy shields without arcane spell failure

Recommended tactic: Use Quick cast to cast True Strike as a swift spell (+20 to the attack roll). Then make an attack while channeling the spell Scorching Ray. When you hit, you'll do the weapon damage plus 8d6 fire!

These two dwarves are decked out in heavy armor and are the lynch pins to the group's combat prowess.

These dwarves are the rank and file.