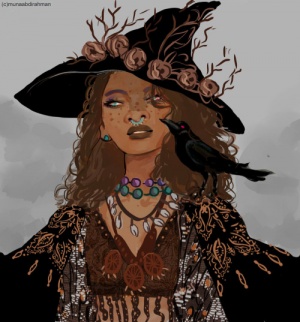 As a young woman, Zephyrine was apprenticed to an older man who taught her magic and they grew to love each other. In this way, she was literally seduced into serving the Sorcier. Several years into this she had her daughter, Zoé. At this time she started to realize that she was part of something that wasn't what she wanted for her daughter and she tried to leave. Her daughter was kidnapped and she was blackmailed into completing missions. On one such mission, Zephyrine realized that the only chance to free her daughter was to get caught and put to death. Then maybe Zoé could be free.

And so she fumbled an assassination attempt and was caught. She confessed everything. Given her abilities, senior people offered her a deal—if her daughter could be rescued, would she become an informant? And so her daughter was rescued and put into a safe house and Zephyrine "escaped" prison.

Her escape was to have a token chase but as days turned into weeks, Zephryine wasn't sure what was going on. She decided to trust that the passphrase she was given would work to convince her pursuers to turn back so that she could do what she had to. This failed and she was cuffed and dragged back to Lisway.

She was betrayed at every turn. The Sorcier. The Revolution. The only hope that she had was Ehsan, who had taken an interest in her. And so Zephyrine befriended Ehsan, in part, to try one last attempt to get her daughter to safety. Zephyrine revealed the location of the safe house and passed a note telling her mother to take Zoé and run, knowing full well that her mother wouldn't leave until after the execution, in the hopes that her own daughter could maybe get an eleventh-hour release.

In the end, Zephyrine was content as she walked up to the guillotine, knowing that Ehsan had gotten her daughter to safety and out of the clutches of the girl's father.