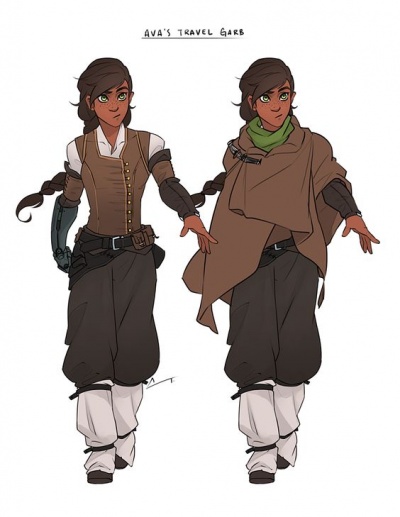 High Concept: Classified Illusionist of the Royal Pride
Trouble: Young, Sheltered, and Ready to Have Fun!
Aspect: Experimental Magitech Arm
Aspect: Child Soldier of Lisway
Aspect: Maybe You Should Install Some Better Locks! Not My Fault They're Easy to Break...

Illusionist - Illusionists have a lot of overlap with tricksters, but focus entirely on illusion magic. You gain access to the “illusion” school, and may select three spells with that keyword.

Accomplished Spellcaster - Select three spells from any schools you have access to, provided you have the prerequisite spells.

Magitech Overload - Once per Session, add a +4 to any roll related to magic. Doing so gives Ava the Moderate Consequence Drained and she can use no other stunts related to Magitech nor her Experimental Magitech Arm Aspect until resolved.

Magitech Amp (adapted from Power Amplification off Venture City) - Ava can touch one individual and send a burst of magical energy through them, giving them the boost Empowered, which they may invoke on their next turn or it goes away. You may only have one such boost in play at a time; if you generate another, the first goes away. If unused, the boost goes away at the end of the scene.

Drawbacks - When you empower an ally, they’re taking some of your energy away. This Leaves You Weakened while your allies are empowered.

Collateral Damage Effect - Mass Empowerment: You can give your Empowered boost to every individual in the scene, friend and foe, in a single wave of energy. Outputting this much energy in a single go, however, has unpredictable effects on inanimate objects; they get tossed around, thrown in the air, and might even explode.

Magitech Focus - Once per Scene, Ava can ignore a Cost for her spell.

But I’m Young and Innocent! - Ava can use Empathy in place of Physique to Defend.

Minor Illusion (Illusion, Trickster, Persistent) - You make an overcome roll: caster’s Will +2 vs. observer’s Will. If you succeed, you create a phantom image or sound that one creature in your zone can sense. Choose one of the following aspects: Distracted, Surprised, Confused. You can invoke this once for free, or twice if your overcome action succeeds with style.

Major Illusion (Illusion, Cost, Persistent, Requires Minor Illusion and one other illusion spell) - Describe a phantom image and sound that you create. All creatures that can see or hear the illusion make a Will roll vs. your Will +2 (you use the same roll for all). Choose an aspect that all creatures who fail their roll are affected by: Surprised, Afraid, Confused, Distracted.

Disguise (Illusion, Trickster, Persistent) - You gain a +2 to any attempt to create an advantage related to disguising a person or item.

Impersonate (Illusion, Cost, Persistent, Requires Disguise) - You can achieve a disguise that makes your physical appearance and voice (or that of a willing ally) match a particular person in almost every detail. The voice and appearance of the subject of your impersonation must be well known to you. If someone interacts with the impersonator who is also familiar with the subject, they get an opportunity to resist your attempt - that’s when you must make an Overcome action, your Will +2 vs. the observer’s Will.

Veil (Illusion, Cost, Persistent, Requires Impersonate and Major Illusion) - Like Impersonate, but veils a group of up to four people.