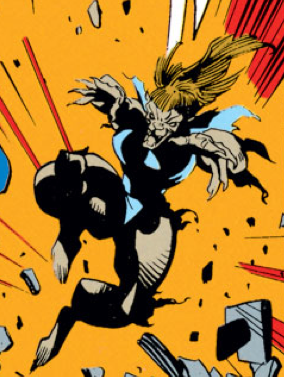 Sioban has lived all her life in the wilderness around the High Horn peaks. It's been a hard life, one that's involved near starvation, dangerous wild animals, and even the occasional pack of bandits trying to skirt the fortress. But now Condrol is moving in, and already their advance scouts are staking out lookout posts around the High Horn Pass- and Sioban's family lived on the best one- secluded, difficult to reach, but with a commanding view of the surrounding terrain.

The scouts attacked while Sioban was out hunting. She returned to find her family stacked up like cordwood.

+ At one with the wilderness and rough, mountainous terrain, can live off the land indefinitely
- Quiet, slow-paced, and a natural approach to life, difficult with technology, noise, cities

+ Push through any obstacle to get to your goal
- Sacrifice anything, pay any cost, betray anything that advances the goal

+ Blend into the background, pass without notice
- Difficulty getting others attention, setting an agenda, taking control in social situations

Burrow
In terrain with soil, debris, snow (anything diggable- not rock, stone, wood, etc), you may burrow. While burrowed, movement is slower, so crossing a zone takes an entire action. While burrowed, you are near the surface and may still be attacked, but may defend with Stealth. You may pop above ground as part of your action, and return to your burrow, allowing you to otherwise act normally
Vanish
Once per scene, you can vanish while in plain sight by spending a fate point, using a smoke pellet or other mysterious technique. This places the Vanished boost on you. While you’re vanished, no one can attack or create an advantage on you until after they’ve succeeded at an overcome roll with Notice to suss out where you went (basically meaning they have to give up an exchange to try). This aspect goes away as soon as you invoke it, or someone makes that overcome roll.
Unseen Archer
When Vanished or Burrowed, gain a +2 to Shoot
Trapper
+2 when creating an advantage w/ Survival involving laying a trap.
Light Paws
When burrowed or vanished, gain a +2 to stealth
Unseen Death'
When burrowed or Vanished, you may use Stealth instead of Fight to attack.
Paralytic Venom
When using Stealth to attack, on a successful attack you can bite and inject a paralytic poison. The target gains the aspect "Poisoned by Shrew Venom". If this aspect was created while Vanished, add two free invokes on "Poisoned by Shrew Venom".