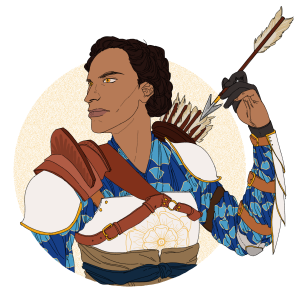 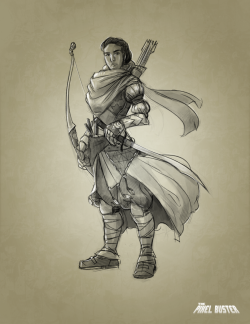 High Concept: Exiled Duskshot Archer for the Order of Wurud

Detail: When she lived back in her homeland, Ehsan achieved the highest rank for archers within the royal militia of Mahakala. She held her position for 5 years before leaving. After returning to Kirkush due to news of her father's illness, Ehsan has been exiled and is to never return; a decree given by the dragon Mahakala'as'saroud himself.
Invoke: Any shoot, ride, and athletics.
Compel: The standards with to which Ehsan has been held to in the Order of Wurud are much higher than those used by the RPM. The sight of an officer slacking off offends her and she cannot help by give him a lecture, possibly putting her in position to be disciplined by those above her.

Invoke: Growing up with 12 other sisters, Ehsan is very used to speaking to and dealing with a wide variety of women. She may more easily empathize or gain their trust. When opportunity presents itself, Ehsan is known to flirt and may be able to gain the attentions of a woman to provide distraction for one of her companions.
Compel: Ehsan is more likely to be easily swayed by the plights of women and may be more eager to assist in their troubles. While not easily taken by the sight of a woman, Ehsan may become more easily distracted by the sight or attention of a beautiful woman.

Detail: Ehsan has been taking lessons with Rosalie to better handle herself among the people. Seeing as she is now a full member of the pride and is likely to be involved more in the local politics, a little etiquette and social training can't be a bad thing.
Invoke: While at a party, Ehsan is speaking with a member of the Senate. Their words seem to contradict themselves and so Ehsan will read their expression and body language to better understand their true meaning. Ehsan could also use this to get herself out of some sticky situations involving gatherings of people. She may also be able to recall Rosalie's descriptions of certain members of society along with their juicy secrets.
Compel: XXXXXXXX.

Aspect: My Secret is Out.

Detail: Now that news is out back in Lisway of her status as a princess of Kirkush among the higher ranking members of society, it was only a matter of time before rumors and gossip about her began to spread amongst the people. Many are now aware that the foreigner in the ranks of the RPM is actually a noble of Mahakala and this draws attention, both good and bad.
Invoke: Ehsan can use her status to walk more easily within higher social circles. She could also use her foreign heritage to impress children or the lower class to gain information or trust from them.
Compel: Even exiled Ehsan is still a princess of a foreign nation. Those who wish to strike a blow against Kirkush may make attempts on her life. Others may try to kidnap her and hold her ransom. On a less serious example, her status as a member of regency of a foreign power may upset certain people in this democratic nation, making it harder for her to gain trust or certain allies.

Aspect: Sameen is all that I have left of home.

Origin: Sameen, Ehsan's loyal steed, is all that she has left of her homeland as she was forced to relinquish her prized bow when exiled.
Invoke: Sameen and Ehsan share a special bond, one forge from years of training and working together. As such, Sameen might be able to sense incoming danger or may be able to alert her companions when she is in trouble.
Compel: Ehsan now desperately clings to Sameen and would do anything to keep her safe, even putting herself in harm's way.

Aspect: I defend Lisway because I've sworn to do so (and I have nothing else)

Invoke: This new bow is well made and finely crafted. The high quality of the wood and make of this bow may allow for an extra precise shot or may entice a person to speak with her and give information to a chance to examine the bow.
Compel: The exotic mystique of the bow may draw some unwanted attention from the wrong kinds of people, leading Ehsan to potentially be targeting for robbery.

Flaw: Made for Giants.

Invoke: XXXXXXX.
Compel: While Ehsan may be tall, her stature is still not quite that of the Volek people. Due to this the bow can be a bit unwieldy.

Stunt: Death from Above

Once per session you may shoot a hail of arrows at your foes, allowing you to attack all enemies in a zone.

As part of your training as a soldier, you may use Athletics instead of Will to defend against magical attacks.

When attempting to Create Advantage with Physique to Pin, Detain, Hold Down, or Grapple someone or something, add a +2 to your roll.

The organization/guild/company who employs you is willing to cover purchases and loan useful tools to help you with your assignments. Gain a +2 for each Wealth and Favor box marked to Attack or Defense rolls for a scene and describe how the equipment helped you.

While mounted you may move up to three zones without consequence instead of one.

Description: You are preternaturally graceful, and gain +2 to Athletics when leaping, balancing, or otherwise demonstrating your agility. In addition, you have a prodigious leap: leaping up to a second-story window or from rooftop to rooftop across a wide alleyway is a simple task that, without further complication, requires no Athletics roll.

Description: If you can see a projectile coming, you can get out of its way with some clever gymnastics. You gain +2 to defense rolls when dodging ranged attacks.

Drawback: React Before Thinking - Your reflexes are so fast that sometimes you react before processing the situation, causing friendly fire issues.
Collateral Damage: Hair-Trigger Reaction - If you are targeted by a ranged attack from another zone, you can use your superhuman agility to not just leap out of the way, but also leap toward your attacker, landing in their zone. This causes the attack to miss you, but it will still hit something in your zone.

Physical 1 2 3
Mental 1 2
Mild 2 empty
Moderate 4 empty
Severe 6 empty
Extreme 8 empty, may only be used between major milestones and REPLACES one of your current aspects.

You may check off a Wealth and Favor box to help solve a situation where money or connections could help. You gain a +2 bonus or a reroll to your roll. In some situations, these boxes may be used to absorb stress, if it makes narrative sense. Additionally, some extraordinary Resources rolls may require the use of this box.

To clear a checked box you will either have to return a favor or find additional wealth. This may be as simple as an Overcome roll of +4 for each box (rolled separately). It may require finding treasure in a monster's lair to replenish your wealth or be a plot point in the narrative as you do a favor for someone you owe.

While mounted you may move up to three zones without consequence instead of one.

Recognizable by Sight (Thorn in the Flesh)

Use your Shoot skill in place of Contacts when dealing with individuals knowledgeable with martial weapons or military organizations.

Get a +2 to Overcome when dealing with your family.

While Sameen, your mount, is with you use Ride in place of Rapport, Empathy and Contacts.

"We've All Seen Some Shit."

Ehsan can use Athletics in place of Rapport when trying to Overcome with members of the military, guards, watchmen, and body guards.