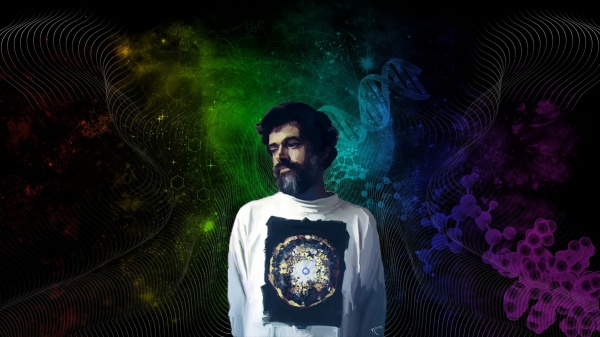 "DonRon" was just a mid-level-management type of drug dealer, enough to have a House, drive a Honda and marry a Hotty; but not enough to have a Mansion, drive a Mercedes and marry a Model. One time, while enjoying his cut of the new goods hitting town, "DRUGNAME" (cf, Red Pill/ThreeEye/Valkyr), something in his brain snapped, changing him forever. At first, he thought it was just a really long trip. But days later, he could still see mathemagickcal waves, the flow of time, aliens, the glow of electricity in the lines, and all these other strange things. He'd had long, bad trips before -- but none as overwhelming as this one.

Following his senses toward a source of mathemagical waves, he met Dr. Dare (as a named extra in a deleted scene in D.O.P.E.S: The Iron Curtain from Space). After a long (and very confusing) talk about the world, right and wrong, and so on, DonRon has been cultivating himself to be a better person and occasionally interacting with Dr. Dare's team. DonRon, deep down, believes that the DRUGNAME he took should not be available, and has been focusing his energies fighting (covertly) against the very gang that raised him. He doesn't destroy the product, though. He keeps it for himself, for it is that drug that gives him the ability to fight the good fight. He's knows he's addicted -- not necessarily to DRUGNAME (though maybe), but to the power it brings him, and, more, to the euphoria from using that power for good. He's afraid of what he'll become in the long-run: DRUGNAME is probably making permanent changes to his brain. He just hopes he can return the world to normal (which means no mathemagic, etc) first. He's able to put aside that long-term goal to work even with mathemagicians in the short term, both to learn about them and also realizing that fighting against villains is a higher priority.

RP Tip: DonRon might combine a Sneaky with Walking Pharmacy to Overcome or Create an Advantage by drugging an opponent. ("Feint to the balls, drop a pill into the mouth." or "Sneak up behind and put the guard to sleep with a syringe."

RP Tip: DonRon will just Force and Flash his way in, without caring about how he'll get back out later.

Rep (Criminal Core)
People know who you are. They might even be a little afraid of you. You can use that to your advantage. When you trade on your criminal reputation to convince someone to do something for you, you may check off boxes of Heat for a bonus on the roll, +2 per box checked.

I Know A Guy (Criminal Core)
Once per session, when you need some special item or piece of equipment, you can declare that you "know a guy" who can get it for you. It’ll take at least a full scene to get it, and it won’t be free, but you’ll get it. At the GM’s discretion, it might also be an aspect with a free invoke. You can use this again in the same session, but you have to check off two heat to do so each time after the first.

DRUGNAME Junky Vampire Heritage (White Court Virgin Core)
You are a member of a White Court family, but you have no standing in it. Choose an emotion to feed on. The known emotions and associated families are lust (Raith), fear (Malvora), and despair (Skavis).
You were a member of a drug dealing ring, but no longer have any standing in it.
Additionally, those around you always feel slight disorientation, and/or see minor strange things around them ("Corner of eye" type. DonRon's not sure yet if he's projecting his vision onto others, or if he's pulling the strangeness into reality).

Confusing Touch Emotional Vampire (touch)(White Court Virgin Core)
You may create overpowering emotions in a target by touching them. To do this, you must succeed at a create advantage action against their most relevant approach. While the advantage is in play, you may also use this power to attack and cause direct emotional trauma. If you impose a condition on your target, you may feed—see Hungry above.

Hungry (sticky) 1 each — ☐ ☐ ☐ ☐ ☐
This condition has five boxes; check off boxes to power vampiric abilities. As long as any boxes are checked, you are considered to be Hungry.
If you are taken out while Hungry, the GM may rule that you go on a murderous feeding frenzy, killing mortals nearby. The consequences of your loss of control could be dire. (The good news, if there is any, is that your hunger boxes clear immediately.)
To clear checked boxes, you must feed. You can feed in three degrees of intensity:

Heat (sticky) 1 each — ☐ ☐ ☐ ☐ ☐
The heat track has five check boxes. When you have Heat, you’re in some amount of trouble with the law. The more boxes you have checked off, the more trouble you’re in; if you only have one or two checked off, you might get hauled in for questioning if you get taken out of a scene. With four or five checked, you might be arrested instead. In addition, any law enforcement agents looking for you get +1 to their rolls for each box of heat checked.
Every scene you spend not getting in trouble with the law (and not generating more heat) allows you to clear one check box.

Stressed (fleeting) 1 each — ☐ ☐ ☐ ☐ ☐ ☐
When you’re Stressed, you’re under pressure, bruised, or getting tired, but you haven’t given up. Check off boxes of Stressed to cancel out the shifts from an attack. Each box you check cancels one shift. Clear all your Stressed boxes out as soon as you get a chance for a breather. You have six boxes of Stressed by default.

In Peril (sticky) 4 points — ☐
When you’re In Peril, something’s gone wrong and left you with a lasting problem. Maybe you’ve been injured in a fight. Maybe your confidence is shattered. Maybe the mob boss put a marker on your head. Check off In Peril to cancel four shifts from any attack. Clear out In Peril when you’ve done something concrete to resolve whatever the nature of the peril is—getting medical attention if it’s an injury, bribing someone to remove the marker, and so on. Usually, this means you’ll need to overcome an obstacle against an opposition of Great (+4) or higher.

Doomed (lasting) 6 points — ☐
When you’re Doomed, you’re in serious, serious trouble. If it’s an injury, you’re holding your guts in. If it’s an emotional problem, you probably need counseling. Check off Doomed to cancel six shifts from any attack. Start recovering from being Doomed when you’ve done something concrete to mitigate the nature of your doom—spending time in a hospital if you’re injured, going to therapy, etc. Usually, this means you’ll need to overcome an obstacle against an opposition of Great (+4) or higher. (You may want to put a check mark by the condition, to indicate it’s recovering but not cleared.)
Clear out Doomed at the end of the next session after you’ve successfully started recovery.

This would be the next stunt learned!

Inside Man (Criminal Additional)
You make a habit of cultivating business relationships with people inside restricted areas. When you’re trying to break into a place, you can get +2 for each heat you check off to rolls made to overcome obstacles.
Theme: Some of this can also be due to his supernatural sight, like seeing the electric waves in the air. He can "go the Matrix" on that alarm system. Or, he just knows the guy like originally themed. Adding to heat, and with low Careful, is probably his leaving evidence behind or setting off the alarm while disabling the rest of the security system.