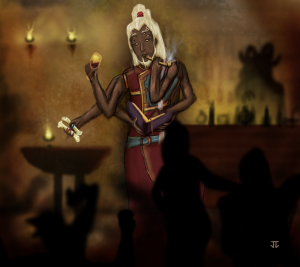 Six armed, legged, & eyed freak who's very confident in himself, worships Fharlanghn, Celestian and Keoghtom. Interested in "helping the world come closer to itself". Visited the party after hearing about the tavern's trip through the grapevine started by the town constables.

The party showed him to the Hag's pocket realm, he investigated it. He wished to return and investigate further. When the party upset him, he fled and vanished. It was a short time later that the party crossed the threshold of the tavern and was transported to the island of Solipsism.

Despite the suspicions that he may have done it in a fit of pique, when the party finally returned to Great Fortress, he claimed to have left the island that night, and then returned when tales of their mysterious disappearance reached him. He has stayed in the Pink Priaprism ever since.

Once he learned of Big and the ancient Celestial temple on Wild Tentacles, he decided to travel there, before Big was killed by the Dwarves.

In the interim, the party reached Bone Island where the cycloptic hags requested they bring Killibron to them so they could find out what he knew and then kill him. Their next stop after that was to meet him on Wild Tentacles on Big's plateau. Killibron confirmed many of the facts the Hags provided, and gave his side of their mutual enmity, which was pretty much the same story the Hags told.

He left Wild Tentacles to return to Great Fortress and the Pink Priaprism so that he could further investigate the tavern.