From Drinking and Dragons
< Wild:PC/Nathaniel 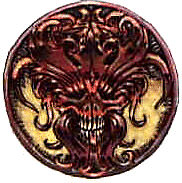 Weapon of the Deity Spell: dagger of venom

Special Notes: LN clerics must be more proficient at wielding negative energy; thus they convert to inflict spells and rebuke or command undead. Divine spellcasters may not restore a weak or chaotic being to life without gaining the permission of Wee Jas (via a commune or similar spell, DM decides the response). Likewise, they many not command chaotic undead without Wee Jas’ permission; they can rebuke chaotic undead without permission though. Failure to abide by these restrictions is considered a gross violation of the code of conduct.

Description: Wee Jas (WEE jas) is portrayed as a stunning woman dressed in a beautiful gown, wearing some piece of jewelry with a skull motif. She promotes the utilization of spells and magic items (though many of her Suel followers insist she favors the creation of such things). She gained her death aspect when the survivors of the Rain of Colorless Fire looked to their goddess of magic for assurance that the dead were being escorted to the afterworld. Wee Jas protects a departing Suel soul on its way to the afterlife, and the clerics of Wee Jas are greatly respected because of this. Her allies are the lawful Suel gods while the chaotic ones are her enemies (except Norebo, who is her lover despite their philosophical differences). Her love affair is supposedly secret, although word of it has spread to the rest of the pantheon and even to her followers. It is rumored that the divine couples first argument caused the southern Crystalmists to erupt in flames, earning their current name, the Hellfurnaces. She respects Boccob, dislikes the beauty goddess Myhriss, and ignores most other deities. Her symbol is a red skull, sometimes in front of a fireball. "Magic is the key to all things. Understanding, personal power, security, order, and control over fate come with the study of magic. Respect those who came before you, left their knowledge, and died to make room for you; there will come a time when your life is over and those who come after will honor your learning and your memory." Clerics of Wee Jas arbitrate disputes, give advice on magic, investigate magical curiosities, create magic items, and administer funerals. The more powerful clerics use their magic to fortify their temple and city. Clerics of lower level are expected to defer to ones of higher level at all times. Her clerics must get her permission before restoring a weak or chaotic being to life.Wee Jas trains her clerics in academic fashion. offering classroom instruction punctuated by increasingly difficult examinations. Her academies are not unlike boarding schools, where small infractions of grooming and uniform regulations are punished with a system of demerits. The followers of Wee Jas are fascinated with magic, especially magic that breaks the boundary between death and life. Rebuilding a plundered tomb, resurrecting an ancient sage, and braving Limbo to ask questions of a long- dead wizard are the sorts of quests the Ruby Goddess sponsors. More so than most deities, Wee Jas venerates a series of deceased "honored ancestors." Worshipers rarely speak of the will of Wee Jas, instead attributing commandments to ancestors such as "Yag the Many-Eyed Traveler says..." or "Grant me the calm of Queen Ochtho XI V..." Wee Jas's temples are covered with funerary trappings, and many have shrines and catacombs where powerful spellcasters are buried-sometimes with a spellbook, staff, or magic regalia. The Wee Jas clergy casts spells on behalf of anyone not obviously opposed to Wee Jas's alignment or agenda, but they often demand service or information in addition to a donation to their church. Funerals are obviously important rites to Wee Jas followers; in addition, many followers have monthly Rites of Accumulated Lore, where clergy or lay leaders read aloud from musty tomes about magic, ancient history, or other esoteric topics. Wee Jas' temples are built like mage towers and are often guarded by charmed monsters. The temples are decorated with artful statuary and unobtrusive skull motifs; they often store lore and records of local law, so each temple has an extensive library. A few even have permanent magical fires burning atop the highest point of the temple. The followers of Wee Jas are known as the Jasadin. Nights when a moon is waxing are holy nights to Wee Jas. Coldeven 4th (when both moons are waxing) is called the Goddess' Blush by her followers; on this night, the most valuable piece of jewelry discovered in the previous year is sacrificed to her in a great magical fire. Ceremonial garb includes layered full-length robes, alternating grey and black. The robes always have hoods but are normally drawn back to reveal the wearer's head, which is normally adorned in jewelry. Other jewelry showing skulls and gems are worn on the arms and neck, and they carry ornate staves. Adventuring clerics wear gray or black robes, adorning them with runes or jewelry as they see fit. Wee Jas is a demanding deity who expects obedience from her followers. She reminds them that death is inevitable, but she promises that their learning and memory will be honroed by those who come after.