From Drinking and Dragons
< Wild:World

The island is one of the more deforested ones, mostly because of how small it is. The entire island is ringed by a modest wall. There is a rigorous customs process at all ports of entry. The island is mostly populated by half-humans but is ruled by an elitist pure-blooded human noble class, and there are constant class struggles fomented by outside influences as well as sects of the church of Dalt itself. The island's primary economy is banking, trade, and being a neutral, secure port of call. The clergy provides about half of the food sources on the island.

Lull is a nearby island (just a few hours' sail in good wind and weather) that maintains a healthy rivalry with Great Fortress, as they both share patron gods regarding defenses.

Daern (LN, Hero-God of Defense and Fortifications) is the patron god of Lull and is also its most commonly worshiped one. However, he does not, however, command a monopoly of worship on the island. Also in common worship are the five Wind Gods (Atroa, Sotillion, Telchur, Velnius, and Wenta, though here they're worshiped collectively) and Mayaheine (a protective, charitable Paladin goddess). There is an underground worship of Erythnul (Slaughter) that is the cause of a lot of the city's internal conflict.

The island is one of the larger ones and is sparsely populated. A significant amount of resources go to maintaining and expanding the walls around the island as part of its rivalry with a neighbor. The entire island is ringed by a mere 5-foot stone wall. However, the stone wall is then topped with buttressed wooden walls that extend up another 25 feet. The wall is dotted with many gates and harbor accesses, many of which don't have functional locking mechanisms any longer.

Overall, the mood here is a rustic and hard life. Because the island is so large, a great portion of it is not settled. Not even the entire coast around the island has been settled beyond the construction of the walls. In addition to the regular internal struggles by Erythnulites, there is a constant struggle here against the wild.

Lull's primary economic function is lumbering. Daily, large lumber parties venture into the wilds to fall a single large tree to recover for a ship mast or (most often) to rebuild the few settlements dotting the island or the wall.

The largest village/port on the island calls itself Quiet Citadel, and is largely devoted to Mayaheine. It is on the side of the island facing Great Fortress.

Great Fortress is a nearby island (just a few hours' sail in good wind and weather) that maintains a healthy rivalry with Lull, as they both share patron gods regarding defenses. 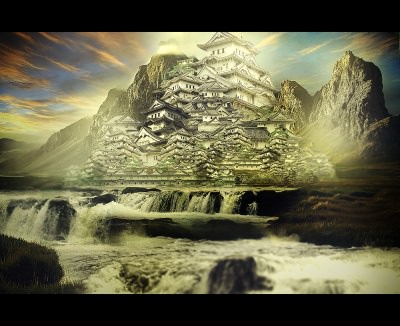 The whole island is a large volcanic bowl. The rim of the caldera rises steeply from the ocean to a height of 7000ft. The caldera is cracked at two points which serve as ports. The bowl is inactive but the rim has two active volcanoes. Geysers and hot water streams are common near the center of the isle.

The most diverse population seen throughout the empire. It has been generations since the expansion of imperial rule and some of the conquered always were kept under watch and mixed with local peoples. Although some local districts remain segregated imperial money has gone to wide roads and bridges to support even the biggest Garl. The original locals were a mixture of birdmen and lizardmen, so snake eyes and feathery scales still remain mostly common.

Two city-states once coexisted on the island before it went into an active volcanic cycle. The two cities went to war over the remaining land. When the volcanoes settled decades later only one emperor remained over a people used to fiery battle. The people of Tepu built ships and went to there nearest neighbors conquering until they ran against the equally aggressive Garls. The long naval war, subjugation, and general lack of nearby navigable enemies led to a long period of bureaucratization.
The civil ministries actually became the power and little concern was shown when the original imperial line actually died out. The ministers eventually concluded so little imperial blood remained that the matter should be handled in a bureaucratic manner. Test for the best candidate and let him bribe his way into office. Such was how Gottfried Detalux became Emperor Fan GD.

Until recently occasional anti-corruption purges kept the citizenry complacent. After a string of naval losses four temples united in pointing to government corruption and the need to return to the fiery morality of the past. They then struck first with ominous lava tides and armies of true believers.

After five years of vicious fighting to put down the revolt, St Cuthbert’s temple was swallowed by the lava fields. This was taken as an omen against the temples, as they had already suffered two years of defeat. The emperor and populace called for a mass purge of the priests that depleted most of the temples to bare sufficiency. The purged priests were either sacrificed or pressed into naval service to stem the pirate trade upon the out-islands.
The present emperor has historic power since nearly all the ministers were his direct appointees because of murders and failures during the revolts. Many of the surrounding territories are worried that Emperor Wei-le Fan may be an able and aggressive leader of a reinvigorated populace.

Positioned on the outskirts of the Fan Empire, Garl is located along established trade lanes to neighboring governments.

A series of atolls around Mt Garl. Heavy seismic activity around Mt Garl is causing most of the atolls to sink. Mt Garl itself is known to regularly vent poisonous gas. Most of the populace now lives on piers or beached vessels. The populated atolls provide freshwater lakes or wells to the fleets that resupply here.

Garlanders are mostly descended from giant races locally referred to as the heroic peoples. Troll, hag, giant, and titan have mixed into a hearty breed of seamen that is rarely attractive. Most of the people are fishermen or aqua culturists. A large shipbuilding industry is carried out here. Most of the imperial merchantmen and naval vessels are built and manned by Garlanders.

Garland was once host to an active pirate fleet that savaged the early Fan Empire. The chaotic raider fleets and captains held competitions to determine dictator for life of the home isles. The last independent dictator, Hun, was an infamous disgraced monk from Tepu. Hun died from wounds suffered during the gladiatorial competition. In his will he ceded his rule to Emperor Wei Jin Fan. If not for the surprise landing of imperial marines with backing from Hun’s fleet, it is unlikely this historic document would ever have been recognized.
The dictatorial games are still held to this day upon the death of the emperor. Ceremonially the winner cedes rulership of Garl to the new emperor. Lesser games are held every seven years to entertain the Garlanders and keep competition sharp for the funereal games. A local monastic order established to honor the last dictator officiates these games. Dark rumor hints that keeping the games ceremonial is one of the least acts of fanatical sabotage they carry out for the emperors.

So Seung
Lu's consort. Mother of children, including "Mother" of So Ho Ni.

Do Deng
Merchant who is blackmailing Bo's family

Originally the island was called Screamholdt. The island had been established as a holding ground for slaves, and received its name for the screams of the slaves as they were killed. The island was built upon the corpses of dragons by a group of Blood infernal Sorcerers. They used the remaining magic from the dragon bodies to form an island. The slaves were mixed breed and brought to the island for holding. Men, women, children…it didn’t matter. The island was cursed by demon pact and infernal gods. The head slaver was a vampire lord who preferred the blood of young innocents. The only retreat the slaves had were when the slept. In their dreams they called out for help, for peace, for rescue. A diamond dragon searching for the missing dragon graveyard responded by calling the three dream spirits or quori. The quori had been running from one of the Madness Lords. The dragon offered a plan, allowing the quori and the slaves to merge into a new race, the Kalashtar. The quori only had to free the slaves and their island from infernal cultists to have a safe home. Thus freeing the dragon’s brethren from eternal unrest, allowing them to find respectful eternal slumber.

The next thirty days the slaves dreamed of the rites they needed to perform to allow the quori to enter this realm. Then on what will be called the Day of Justice the Kalashtar were born. The quori are divided into three castes. The Tsucora were the rebel spirits that looked for escape originally and made up most of the Kalashtar. The Tsucora were formed from the dreams of hope and inspiration. The Hashalaq were the spirits of mediation and calm. They were formed by the dreams of those seeking rest and healing. The last were the Du’ulora, formed by the dreams of vengeance and retribution.

The Kalashtar moved as one mind and with help from the other slaves destroyed the sorcerers. The slaves have been slowly taking over the island. They renamed it Kali’Ma and took over most of the ports. There still are areas inhabited by some of the more dangerous pets kept by the former masters. A pack of vampiric wolves seemed to hunt along the southern shores and hide in caves during the day. The occasional grick is found along the coast. Currently the Hashalaq Kalashtar appointed as the ruling council. The slaves have been selling off their former masters’ magical trinkets and components for money. Food and water comes from the three peaks at the southern end of the island. The island has a small problem in that it is built on the skeleton remains of ancient wyrms. Therefore the main product produced is ivory. No trees currently grow on the island. Most of the vegetation is vines and grass. Goats were raised for meat and milk on the island and wander wild on the northern grass hills. Coral reefs dot the eastern shore line and extend into a kelp forest bed. Sea otters and seals inhabit the kelp beds. Whales also migrate and mate off the northern and western coasts. Storms pop us frequently and usually bring trouble.

Gnala and Algol-Nun contains an expanded explanation of the area. ;-)