Only surviving subject of failed experiment by the Archmage to create a weapon against the Lich King.

Barbarian Rage
Once per day use a quick action to start rageing. A rage lasts until the end of a battle.
While raging roll 2d20 to hit with barbarian melee attacks and use the higher. A natural 11+ on both dice and top dice hits makes the attack a critical.
Recharge 16+ : After a battle in which you rage, roll a d20 and add your Constitution modifier; on a 16+, you can use Barbarian Rage again later in the day.

Unstoppable
Once per battle, declare you are using Unstoppable before making a barbarian melee attack. If your attack hits at least one target, you can heal using a recovery.
Strongheart
Your recovery dice are d12s instead of d10s like other barbarians.
Barbarian Cleave
Once per battle as a free action, make another barbarian melee attack after you have dropped one non-mook foe to 0 hp with a barbarian melee attack. (Dropping the last mook of a mook mob also qualifies.)
Adventurer Feat : You gain a +2 attack bonus with Barbaric Cleave attacks. If the cleave attack hits, you can heal using a recovery.

Never Say Die
Racial
Whenever you drop to 0 hp or below, roll a normal save if you have a recovery available. On an 11+, instead of falling unconscious, you stay on your feet and can heal using a recovery. Add the recovery hit points to 0 hp to determine your hp total.

Physical Description
Bulgy, grey, 8 foot tall (but hunched over). Hideous, but very proud of his cleft chin.
Mannerisms Description
An object in motion stays in motion, an object at rest tends to stay at rest.
Personal (non-Icon) Goals
Epsilon wants to protect people from the predations of those in more powerful positions. Sometimes this protection looks an awful lot like Lemmy with a bunny.
Action Heuristic (c.f., alignment)
I'm why we don't have nice things, but I generally want to be nice to people.
Religion
Had it once, didn't stick
Family, hometown, city/region of origin?
Street urchine who was picked up by the archmage.
Catchphrase, theme song, etc
Here we go again!
Languages Determined
Low Imperial
Graphic Representation (icon for maps) 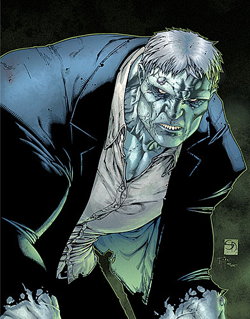