Despite my best efforts through years of study, I could not master magic on my own. In a moment of desperation I made a pact with a Shadow Demon masquerading as a Dark Elf in order to unlock the secrets of magic. His touch has left my hair struck white, eyes a piercing purple, and his symbol is burned into my right shoulder blade to mark me as his (not that I know this). He gifted me with a book from which I draw my spells. The branches started barren, but slowly have filled with a multitude of leaves that vary in size. The tree currently seems almost 1/3 completed, I do not know what will happen when it is.

Surprising (Racial Power)
Once per battle, subtract one from the natural result of one of your own d20 rolls.

Otherworldly Bolt (Adapted from Lightning Fork)
Ranged Spell
Recharge: 16+ after battle
Target: One nearby enemy; chain spell
Attack: CHA + Level vs. PD
Hit: 7d6 + CHA lightning damage
Miss: 1/2 Damage
Feat: Once per battle, you can re-roll one of your lightning fork attacks rolls.
Flavor text: Your hands crackle with purple energy before a multiple bolts arc out towards your foes.
Level: 3

Faerie Fire (Adapted from Chaos Bolt)
Ranged Spell
Recharge: At-will
Special: The first time you use chaos bolt each battle, determine a random energy type. The spell deals that type of damage each time you use it that battle.
Target: One nearby or one far away enemy with a -2 penalty
Attack: CHA + Level vs. PD
Hit: 3d8 + CHA random energy damage and if the natural attack roll was even, you gain a chaotic benefit as if you had gathered power.
Miss: Damage equal to your level
Feat: A: No penalty for attacking a far away enemy.
Flavor text: Delicate wisps of color-shifting flame sprout from your finger tips and move lightning quick to strike the enemy.
Level: 3

Winter's Grasp (Adapted from Scorching Ray)
Ranged Spell
Recharge: At-will
Target: One nearby enemy
Attack: CHA + Level vs. PD
Hit: 3d6 + CHA cold damage, and if the natural attack roll is even, the target also takes 2d4 ongoing cold damage.
Miss: Damage equal to your level
Flavor text: A thin film of frost coats your arms from fingertip to elbow. You point at your target and a burst of cold mist envelopes their form, chilling them to the bone.
Level: 3

Thunderwave (Adapted from Crescendo)
Close Quarters Spell
Recharge: At-will
Target: One or more enemies engaged with you (but see below)
Attack: INT+ Level vs. PD
Hit: 4d6 thunder damage, and the target pops free from you.
Miss: Damage equal to your level.
Level: 3

Creeping Cold (Adapted from Breath of the Green)
Close-quarters spell
Recharge: Daily
Target: 1d4 nearby enemies in a group; breath weapon
Attack: CHA + Level vs. PD
Hit: 15 + Charisma ongoing cold damage.
Miss: 5 ongoing cold damage.
Breath Weapon: For the rest of the battle, roll a d20 at the start of each of your turns; on a 16+, you can use breath of the green that turn if you wish.
Level: 3

Shadow Whelm (Adapted from Echoing Thunder)
Ranged spell
Recharge: At-Will
Target: One nearby enemy
Attack: Charisma + Level vs. PD
Hit: 3d6 + Charisma negative damage, and the first enemy that hits you with a melee attack before the start of your next turn takes 2d6 negative damage. (An empowered spell does not double this bleed damage.)
Miss: Damage equal to your level.
Level: 3

Shadowmeld (Adapted from Blur)
Ranged Spell
Recharge: Daily
Target: You or one nearby ally.
Effect: For the rest of the battle (or for five minutes), attacks against the target miss 20% of the time.
Flavor Text: The shadows below seem to move and shift, coalescing around you and clouding your form in a murky haze.
Level: 1

Shadowveil (Adapted from Shield)
Close-quarters
Recharge: 11+ after battle
Target: You. Free Action to cast, when an attack hits your AC.
Effect: The attacker must reroll the attack. You gain a +2 AC bonus against the rerolled attack.
Feat: You can now choose either of the attack rolls, in case the second one crits or is otherwise bad for you.
Flavor text: The shadows below seem to move and shift, coalescing around you in a formless mass to shield you from harm.
Level: 3

Thunder Snap (Adapted from Burning Hands)
Close-quarter's Spell
Recharge: At-will
Target: Up to two nearby enemies in a group
Attack: CHA + Level vs. PD
Hit: 1d6 + CHA thunder damage
Flavor text: As the enemies close in around you, you outstretch your hand and snap you fingers together, causing a almost deafening wave of thunderous force to sweep out.
Level: 1

Cold Snap (Adapted from Breath of the White)
Close-quarter's Spell
Recharge: Daily
Target: 1d2 nearby enemies in a group; breath weapon
Attack: CHA + Level vs. PD
Hit: 3d6 + Charisma cold damage.
Miss: Half damage.
Breath Weapon: For the rest of the battle, roll a d20 at the start of each of your turns. On a 16+, you can use Cold Snap that turn if you wish.
Flavor text: A wicked smile spreads across your face and the shadows around you grow long and dark. A low white fog billows from your feet as as the breath of your enemies turns white with fear.
Level: 1

Access to Wizardry
Starting at 3rd level, you can take a wizard spell in place of a sorcerer spell. The wizard spell must be two levels lower than the sorcerer spell.
Breath Weapon
Spells with the breath weapon keyword have a chance to be re-used during battle. Each breath weapon spell lists the chance of re-using it (usually 16+). At the start of each round after you've cast the breath weapon spell, make the re-use roll. Success indicates that you may re-use that spell as a standard action, but for that round only. If you fail the re-use roll, you don't have the option to re-use the spell, but you get another chance at the beginning of the next round.
The breath weapon power lasts for a single battle only.
You can have only one breath weapon spell active at a time. If you cast a different breath weapon spell when you have an earlier spell active, the new spell cancels the earlier spell. (See the Chromatic Destroyer Heritage talent for the path to multiple breath weapon spells.)
Failing a death save cancels any breath weapon spells you have active.
Chain
When you attack with a chain spell and get a natural even roll, you can roll another attack against a different enemy within range. Keep on rolling attacks as long as you get even rolls and don't run out of new targets. Each enemy can be targeted only once.
Dancing Lights
All sorcerers can cast the dancing lights spell as a standard action. Unlike the wizard's light cantrip, the sorcerer's dancing lights spell produces a number of varicolored light globes that bloom within 5 to 30 feet of the sorcerer every two to five seconds. The sorcerer has very little control over the exact location or illumination provided by the lights, meaning that they can occasionally be used for dramatic plot purposes.
Gather Power
Once initiative has been rolled and a battle is underway, a sorcerer can spend a standard action to gather magical power, preparing themselves for casting a double-strength spell with their next standard action. Gathering power is loud and very noticeable. Sorcerers who want to gather power before initiative has been rolled can go through the motions but won't get any benefit from the act.
When a sorcerer gathers power, it does not count as casting a spell; you can gather power without taking opportunity attacks.
In addition, because you spend your standard action to gather power, you generate a small magical benefit. Like many of your powers, this benefit is chaotic rather than perfectly reliable, so you must make a random check to see what benefit you get. Roll a d6 and consult the appropriate table below.
If you get a benefit that deals damage to enemies, you can choose the type of damage (cold, negative, lightning, or thunder).

Random Energy
Some sorcerer spells deal damage of a random type. If it matters mechanically, use a d4 to determine which type of damage the spell deals. If it doesn’t matter, because none of the targets have resistances or vulnerabilities to any particular energy, feel free to state the energy that seems right for the story, or roll it if you wish and the game can spare the time.

Arcane Heritage
When you hit with a commander melee attack during your turn, gain 1d3 command points.
You gain a +2 bonus to a background that involves or suggests magical knowledge or talent, up to your normal maximum background point limit.
You can also use one of your sorcerer spell choices to choose any wizard spell of the same level. You get only one such equal-level wizard spell at a time; all others have to be purchased using the 2-level penalty in the Access to Wizardry class feature described above.
Sorcerer's Familiar
You have a familiar much like a wizard's familiar, but more changeable. Unlike the wizard, you don't choose two abilities for your familiar. Instead you choose one permanent ability that suits your familiar's nature; the only limitation is that you can't choose tough as the permanent ability. Each time you get a full heal-up, randomly determine two other abilities your familiar will possess until your next full heal-up.
Umbra: A fey touched ermine. Her fur is stark white and she has small antlers that spout from her head. Her eyes are also known to glow an eerie purple at times, though the trigger is a mystery.

Alert, maybe even insightful: You gain a +2 bonus to Wisdom skill checks.
Random ability #1 - Agile: You gain a +2 bonus to Dexterity skill checks.
Random ability #2 - Counter-bite: Each battle, if your familiar is close to you, it bites the first enemy that hits you with a melee attack after that attack, dealing 1d4 damage per level (no attack roll) to that enemy.

Marked by a Shadow Demon (Adapted from Undead Remnant)
You have resist negative energy 12+ and gain a +1 attack bonus against demons. You can also include negative energy damage on your personal random energy damage type table, swapping out an energy type you don't want to access randomly.

An athame, a set of small glass vials, 5 small scrolls, a pouch of common spell components, a pouch of common herbs, a smaller pouch with rarer herbs, a tinderbox, a waxed cloak, a spellbook, a fine quill and ink pot, a fine set of clippers and small knife for gathering herbs, a magnifying glass, a mirror, an elegantly crafted heartwood pipe, and 10 pinches of pipeweed, individually wrapped in waxed paper.

A magical rune (+1 to attacks for 1 battle)
A carte blanche from an agent of the Emperor
A dormant mandrake root that can be used to gain a surprise round in an encounter.
A sachet of strange tea from Qistis's mother.

Perpetual Academic at the Silver Spire Wizard's Conservatory +4
Despite her best efforts, Qistis could never master magical powers on her own, leading her to an overly extended stay as a student at the Silver Spire Wizard's Conservatory. Her knowledge of near anything taught to wizards is vast, and honestly probably better than most classically trained in the magical arts.
Adjunct Professor of Rhetoric +3
President of the Herbolist's Club +1
Thesis on "The Dark Forest: Relationships between its denizens and demons; an exploration on pacts, rituals, rites, and the nature of the moving forest of shadow." +2 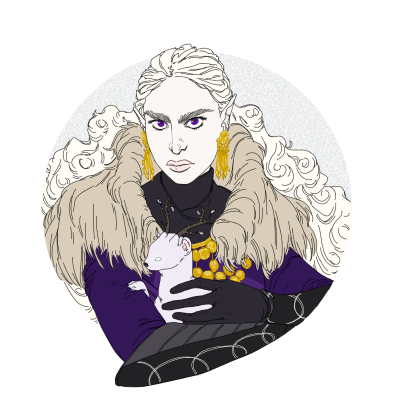 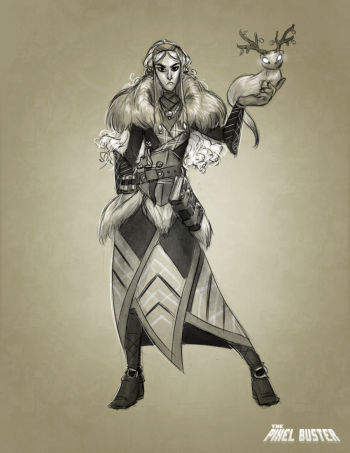