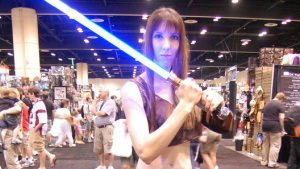 An attractive woman who uses her sexiness to seduce nerds to sign up for the Trig-A-Tronomy contest.

Brick: Hey, yo! Trina is a chick I met while signing up for Trig-o... Trick-o-nomo-tree. Turns out she's a fan of good ol' my football team. I asked her to the afterparty we were going to, & she decided to come along. She ran away when fighting broke out. Man, that sucked. And she was sooooo hot, too!