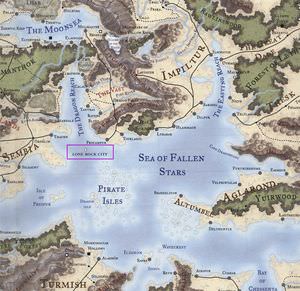 If you click on this map to enlarge it, you will see city of Procampur to the NE, the city of Scardale to the NW, and the nation of Sembia to the West.

Thousands of years ago, the sun elves of House Dlardrageth secretly bred with succubi to strengthen their bloodline. They were eventually discovered and imprisioned on the island of Lone Rock in the Sea of Fallen Stars. Powerful elven wizards then sent the island to the Abyss. The fey’ri (demon elves) lived out generations on the island in the Abyss, seeking for a way to return to Toril. About 15 years ago a powerful fey’ri wizard was able to undo the ancient elven magic and return the island to Toril.

When the island unexpectedly appeared Dac’Angelo and his adventuring company, the Iron Men, went to the island to explore. The fey’ri stayed hidden, and thus Dac’ Angelo and his men claimed the island and began to build a city on the island. About 5 years after the island appeared the fey’ri made themselves known by attacking the newly appointed King Dac’Angelo and demanding the ten rings of power. Not knowing what the ten rings of power were, the people of Lone Rock City were held captive until they were found. A new adventuring company, the Kobold Bashing Society, from the island went seeking the ten rings. They found five of the rings; the Ring of Time, the Ring of Chaos, the Ring of the Elves, the Ring of Kelemvor, and the Ring of Reversal. Using the rings this group was able to infiltrate the fey’ri’s stronghold, save King Dac’ Angelo, and kill the two leaders of the fey’ri–including the wizard who had brought the island back to Toril.

And there has been peace on the island ever since. Until now, ten years later…

This category has the following 3 subcategories, out of 3 total.

This category contains only the following page.