From Drinking and Dragons
< Disposable:Nest 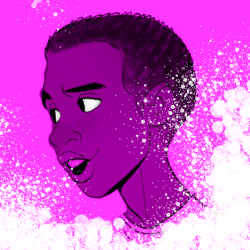 Heroic Concept: Defender of the Songbird Tribe of the Oak River Forest in Epoch
Mundane Life: Full Scholarships to Multiple Colleges
Hook: Forgetting the Death of My Parents

Flying Squirrel
Because I'm the Defender of the Songbird Tribe, I can glide through the air like a squirrel. Get a +2 to Overcome when using Athletics to bypass a barrier or move zones.
"Old" Movies
When Creating Advantages with Lore that reference "old" movies, get a +2.
PARKOUR
+2 to Defend against multiple opponents.
No One Looks Up
Because I can glide through the air and climb, I get a +2 to Creating Advantage with Stealth.

Cartographer
Because I love the outdoors, but the outdoors hates me, I've spent a lot of time in Nest exploring and so when planning a travel route, use Investigate to plan the best path.
Reckless Anger
Because I'm Escaping the Death of My Parents, I fight recklessly in the hopes that getting hurt will ease the emotional pain. Gain +2 to attack using Fight.
Sticky Hands
Because I'm Great at Climbing, gain a +2 to Defense while climbing as you're able to better move around than most.

Physical 1 2 3
Mental 1 2 3
Mild 2 empty
Moderate 4 empty
Severe 6 empty
Extreme 8 empty, may only be used between major milestones and REPLACES one of your current aspects.