The Best Defense is A ... Fence (Goblin Raiding Party) 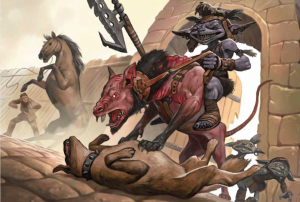 Marco: More goblins. Torag must be rewarding me indeed, to give me so many wonderful foes to cleave asunder. And not just goblins, but a goblin dog as well! Stinky, ugly, gross bitch. Good things she's missing some of her insides now. Oh, and there was this human. He was cowering next to the corpse of his own dog, some fancy show one named Princess. I believe his name was Aldern Foxglove. Seemed a right enough fellow for a human. I went to make sure he was alright while my companions went about finishing off the rest of the goblins. When things settled down he offered to repay us for saving him with a boar hunt. Sounds like a fine time to me.

We were approached by members of the town guard, and thanked for our help. It also came up that there was a few goblins captured alive, for interrogation. We can't full well pass up the chance to make these little buggers squeal, and so followed the captain of the guard, Sheriff Hemlock, to the guard keep. After a short amount of poking and prodding, they told us that the leader of the attack was a longshank, whose name they didn't know. And that he was headed to the graveyard, the real purpose of the attack. We went forth to see what he was after.

Marco: Well, these clerics may be heathens, and not know the glory of the forgemaster Torag, but I'll give them this much. They have a wonderful chapel here. Very well built. One of the priests came up to us to see if we needed anything, and directed us to the graveyard entrance when we asked. Once inside the graveyard itself, we noticed something quite strange. There were little goblin footprints everywhere, and the grass was all torn up and muddy. They all seemed to be going to the crypt of the last high-priest here, and so we went to investigate.

Once we opened up the crypt, there was a skeleton. The kind that move around on their own. Just our luck. The great smelly druid, Stavros, took a good sized slash across his chest, and we couldn't have any of that. It turned out there wasn't just one skeleton, there were in fact three of them. We made relatively quick work of them, and sent about figuring out what was taken. It turns out the corpse of the last high-priest was what they were after, and the inspection of the arms and armor of the skeletons showed that they weren't raised from any graveyard near here, the blacksmith's mark being strange and unknown for these places. 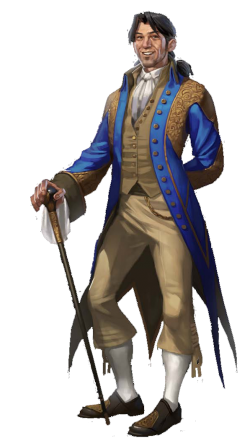 Marco: Ah, boar hunts. A great way to get a meal, and a fine way to spend an afternoon. Now if only our host wouldn't make us ride on these horses. I don't like the idea of not being able to put my feet on solid ground, no mater the occasion. Just doesn't feel right. Aldern is a good enough human, and decent with his crossbow. He wounded the beast and we buried an axe so deep into it's skull I'm surprised it came out.


Debacle at the Rusty Dragon Inn

MarcoWe had the wonderful chef at the Rusty Dragon Inn prepare the boar for us. For the life of me I can't remember the lass's name. Either way, she can cook up a tasty pig. We couldn't rightly have a feast without proper dwarven ale, so me and Georgio had to be retrieved from the marketplace. We managed to round up three bottles, for a decent price. The food was excellent, and despite the minor interruption by the inn's matron's father, who came up to us and ranted some nonsense that we were evil Malatestans that were responsible for something or other, the night was wonderful. At least until we found out the ale wasn't as pure as we thought it was, and had been poisoned. Ah well, looks like I'm going to have to do a little bit of questioning to get down to the bottom of this. And I'd just cleaned the goblin out of my armor, too.

DM: Marco suffered 2 points of Con damage from the poison.