Wild:10 Dwarves Will Breed With Anything

Fuelwen: Xannifer vanquished, we looted her castle, and freed her prisoners. Igoriana crafted Bo an artifact, and then told us a secret of the dream world. One could travel anywhere through the dream realm, and by so doing dream themselves to a point in the real world.

I could get to the sky, I hoped. She also suggested I seek out the gith people.

So we started walking. I knew that my companions, thinking my quest insane (I'm inclined to agree, but it is the quest I was given), were not trying to get to the Great Whale. That mattered little to me- I could get there, if only I could dream the path.

Fuelwen: And I failed. Nathaniel and I fell into the ocean. Lost, again, I saw an island, and swam there. Who should I encounter but the rest of our party, talking with an elderly dwarf.

Dwarves? Why? This island, christened Wild Tentacles, is a hub for Dwarven shipping. Not one among the party has any connection to this island. There's no reason any of us should have dreamed ourselves here. But we are here- so did we dream ourselves here, or did something draw us?

We spent the night with the dwarf, and set out for the main city the following day.

Rake: Island was not named by dwarves. They felt island incomplete. So I named it wild tentecles for fuelwen. Let dwarves fight me for name. Puny dwarves.

Fuelwen: Warned of the dangerous beasts on the island, we proceeded cautiously. Through mangrove forests and brackish swamps, I was pleased for the opportunity to spend a day traveling without having to walk the entire way.

Partway through the day, we were attacked by a pack of Golden Wolves. These electrically endowed hunters would surround their prey, doing electrical damage to their targets. A most dangerous breed, only to be challenged in numbers. It wasn't a difficult battle, but if the pack were slightly larger- if we keep voyaging about this island, we'll need to find better defenses against them.

The wolves had pelts of pure gold- truly valuable. I skinned and prepared them. Rake chose one to keep as a vest.

Fuelwen: Near the end of the day, we reached First Landfall, the capital city on this island. There was some slight confusion in our initial meeting, but it was resolved. We spent the afternoon restocking and speaking with the locals, while waiting for the leader, Advic. Advic is willing to pay our passage to Drnin Tg, the local hub which connects to anywhere we like, but needs us to explore a nearby plateau.

Why? No idea. But my suspicion is that it's related to the force that drew us to this island. It's too convenient- a prominent, unexplored landmark, that we're tasked with investigating? 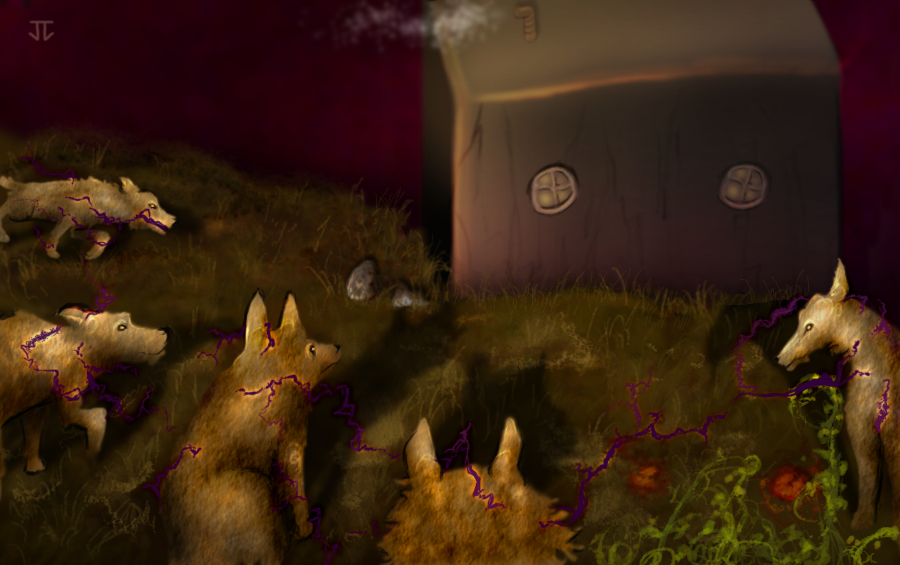