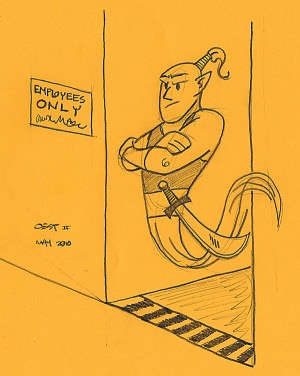 You shall not pass ... unless you're an employee.

Fuelwen: It should not have been a surprise to see the Pink Priaprism ashore at Lull. Well, no- it should have. The fact that it was there was depressingly unsurprising. Upon investigation, we found Killibron there, rejoicing in the fact that he had successfully altered the behavior of the tavern, and was able to make it ethereal and translate it here.

Which is fascinating, and potentially useful. If he doesn't destroy the building first. In any case, he had dispatched One Horn to fetch laborers to effect minor repairs and build a pontoon capable of carrying the tavern. I explained to him that, in no uncertain terms, we would be towing it to another port.

Brilla: It seems that there is no escape from The Pink Priapism. No matter where we go, that inn will always haunt us. Havin it appear somewhere random in Great Fortress would not have been distressing, but finding it at the shores of Lull was near enough for me to give orders to turn the ship about.

As we guessed, Killibron was to blame... yet again. Evidently this is some experiment to have the ship travel using the Ethereal plane. With agreement from Fuelwen, we decided to tow the ship to a new island where the experiments can continue. Hopefully the next island will be a lot less forgiving and not wish to burden the inn with a pile of litigation.

Nathaniel: We discovered that Killabron was able to teleport the Pink Priaprism by experimenting with the hag's formulas. Fuelwen, Killabron, and I venture forth to Hazy Hamlet, home of the Erthynul worshippers in hopes that they will allow us use of their portal.

Fuelwen: While we waited for that to complete, I commissioned a keen falchion. This gives me a single weapon that does a bit more damage, despite tying up two hands. When I strike true while using Blade of Blood, the damage is quite incredible. I think it is a fair tradeoff. It's still good to know that I need not be dependent on any weapon.

In any case, this gave us a few days of down time, and I decided that we should investigate the portal on this island, back in Hazy Hamlet. The portal let out into a hospital. At least, that was what they called it- it was like no hospital I had ever seen. Casualties were given separate rooms! It had none of the stench of blood nor the screams of amputees. It was more like a hostel.

We explored, running afoul of the local rules about where one can and cannot go. Fortunately, Bo could become an "employee" thanks to his medical skills. We did a bit of shopping, and I returned with a fire flower, as a trophy of my travel to the plane.

Brilla: While on Lull, the group decided that it would be worthwhile to check out the portal that was originally on the island.

Going back to the center of the island stirred some memories of Rake and his "discovery" of the Blood Storm. I'd hate to admit it, but sometimes I miss him. Like the way you miss a sore. It was there, and it was painful, but it has some memories that grew from it anyway. ...No dad, he wasn't marriage material. Give it a break!...

The portal led to a place in the plane of fire called The City of Brass. Of all places, we landed in a very lawful hospital that was a tad too strict in it's rule for my sake.

Bo was overjoyed to find himself in a hospital and volunteered his time to help. This would at least make things easier for us to pass the "Employees Only" line that separated us from where we originally came.

While there, I figured I would pick up a souvenir for my mother. I found an everburning log for my mother's hearth that actually gives off heat.

Nathaniel: Upon our arrival we are greeted in lukewarm fashion but permitted to use the portal. Killabron conducts a series of examinations, determining that it is in fact a two-way portal. Bo contacts us from afar, asking us to wait until we are all present to enter the portal.

Once we are all gathered we douse ourselves with protective magics and enter the plane of fire, only to arrive in what appears to be a hospital. As we explore and speak—in common!—with the inhabitants, it is revealed that we are in the City of Brass. We are introduced to Toraido, a fire gnome doctor who volunteers at the hospital. Unsupervised for but a moment, Killabron strolls out into the marketplace. Fortunately we gather him up quickly, and, well, since we were there anyway I purchased a bracer set. Killabron purchased a fire beetle.

Brilla: On the way to Barradin we came across a familiar ship, the Tumbler. Burrow seems to have fallen on hard luck, though, as my father's enemy the ex-captain Makhail as well as the less desirables of my island, Louise and Genorea, seem to have taken over his ship.

By request, we decided to exchange pleasantries by having dinner at my ship. When they offered to bring the food, I immediately expected poison. I called forth to Buer before the party to help protect us from any tricks they may have. When none of us had any effects from the poison they seemed a bit taken aback in conversation and left.

We planned later that night to take their ship by force and help free Burrow. Fuelwen and an undead attacked by teleporting in through the bottom of the ship while the rest of us crossed via planks.

The battle went well, though Louise was able to damage our ship at a distance with some of her magics. I am sad I was not able to strike the final blow to Makhail with my father bound to me, but I could feel him rest more easily knowing that one of his greater foes was finally brought down.

Later, Burrow informed me that some cosby named Thedy has kidnapped my Aunt to draw me out. I'm not even sure who this Thedy is, but I can only assume it is one of my father's lesser enemies. I'm sure he is of little importance whatsoever and will be easily dealt with.