Wild:60 Attacked by an Angel 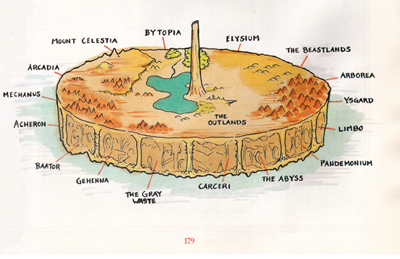 TskTsk: Fuelwen and I enter into Pandemonium with our sacrifice. We each hear a collection of screaming voices, yelling out at different volumes and intensity. I make quick work of our Celestian so that we can leave. I gesture to Fuelwen to exit first but he refuses and counter offers. I decline and offer once more. A few more back-and-forth exchanges and I tire, so I return to Sigil.

Upon exiting it seems that some animated claws have attached themselves to my person. The nails have dug through my chitin and I feel a mild poison course through me, to which my body fends.

Brilla: Fuelwen came back looking 'funny.' He also said he met someone there that we saved in Quiet Citadel. Very odd indeed. I think the plane may have gotten to him.

TskTsk: We return to the inn, Planars, and discuss a shopping trip. Clutch mother is adamant about everyone staying together in a cluster. I volunteer to stay at the inn and babysit the Celestians.

Well, babysit is what the rest of the clutch thought I was going to do. Instead I purchase a number of daggers for the Celestians and begin to teach them a few basic dagger maneuvers. My recent disregard for these folk was starting to wear heavy on my soul. I know they are sheep. So I train them for a few hours so that they can make an honest attempt at defense as Fuelwen, the elder, and myself cut them down for the greater good.

Brilla: We were now out of places our guide could take us. This was the perfect time to do some things that we needed to do for ourselves until something else panned out.

Under the guide of helping Fuelwen, I went out to seek some clarity in what to do with my ancestors. I eventually came across the Godsmen that believe I've already passed two test on the way to some form of enlightenment. I can't really disagree with them, though their lack of organization is a bit daunting. I was given the names of a few people that may be able to help me. I don't have time to do this now, but I may have to revisit it in the future. Fuelwen is looking a tad too red in the gills and I think it is time to leave.

TskTsk: The elder found us a guide whom he called "Vacuum". He is an invisible stalker and he knows his way around the city.

Our next destination is Limbo and we have two choices for a portal. The first is to hunt the portal in a hive maze that moves. The second is to go to the Hall of Speakers and get faction officials to agree upon something. I opt for the hunt, as does the elder, and off we go.

I arrive in Limbo locked in chains and being attacked by our sacrifice. As I escape the bonds they recapture me and I grow frustrated. Nearly on the edge of giving up I overhear the frog beast say that this plane is a contest of wills. The shackles burst apart with the application of my will and I end the Celestian.

Brilla: Bo eventually got us a new guide that greeted us with a knife to Bo's throat. "Vacuum" was just testing Bo as he was able to spot him earlier, something the invisible stalker was not used to.

Instead of normal payment, he wants experiences from us. This doesn't seem too bad and we agree to the payment.

He seems pretty on top of things and gave up the way that are common to his people. He is reformed, so to speak. It's refreshing to see and hear. I just hope he doesn't have a relapse with us around.

TskTsk: I desire to spend time here, but alas, time is a sparse resource.

TskTsk: The portal to Arboria is in the branches of a large tree. As I exit the portal a winged woman with a mace is there to greet me, and she is pissed. She acts with authority and tells me that "our actions have not gone unnoticed". She wishes to mete out justice.

The elder exits the portal and I warn him of the danger, quickly killing our sacrifice. The portal slowly closes, with Fuelwen joining us but the clutch mother remaining in Sigil. The woman plays a tight defensive game but lacks in offense.

Her arsenal is limitless, so the elder, Fuelwen, and I scatter to the wind. I hope to draw her attention so the others can backtrack and exit using the portal.

DM She wants to collect you for justice. It is not her role to dispense it herself.

Brilla: It is a good thing I stayed behind. It has been quite a while since the portal closed behind them. The good planes really don't have the dangers that the evil or crazy ones do, so it must have been some sort of trap. Something powerful must have been on the other side to close the portal, and it must be aligned with the planes of good and chaos to do such.

I guess I'll have to initiate Plan B and take care of the rest of these initiates by myself. I don't want them to go with fear in their eyes and with the pain of the knife.

I'm going to have to get a multi-part poison, one that is really strong and fast acting in death once active. It is also going to have to be tasteless or at least blend well with certain foods. Also, having them die in these rags is unbecoming. Perhaps different styles of outfits for each person.

I'm also going to have to discuss that true purpose of their sacrifice and that in doing such they will be with their god for eternity for fulfilling the purpose given to them and delivered through their diligent faith. Even if they protest, the poison will take hold. Sad, but necessary. I just want them to be at peace with what they are doing.

I also can't let them suffer on their own. My body is strong and armed with the fact that I am on the path to transcendence, I know the poison wont kill me. I do deserve to suffer for what I will be putting them through. Perhaps after a few of outings I may come upon an epiphany through the poison haze.

I have not gone through any of the portals, so I hope that I'm not known to be an accomplice. I just have to wonder how someone found out about this. There aren't many that know of what we are doing...