Wild:8 Where the Dead Things Are

Wandering through the jungle

Fuelwen: Stranded on a mysterious island populated with troublesome imps, we moved towards the coastline to attempt to circumnavigate the island, in hopes of finding a way to escape. I carefully watched the sun, attempting to get a feel for our latitude.

Fuelwen: We settled in for the night, and a Grey Jester approached our campfire. A maniac fae, it fed from our laughter. Like the imps, it was more set on harassing us than fighting directly. I cannot abide these sorts of maniac foes; they fight without reason or sense. It fought us for a bit, then ran for the woods. We chased it, Rake killed it. And ate it.

Fuelwen: While chasing the Jester, I was attacked by a naked humanoid with a sword. It had no mind. I assume that it was controlled by the Jester- but I'm curious why the Jester programmed it to attack me, and me alone. Since it was essentially dead already, I butchered it and prepared the meat with salt water so that it could be preserved. Rake protested, but it was generally agreed his protests were hypocritical. 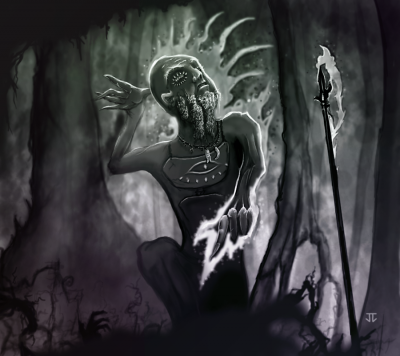 Encounter a blind shaman named Gorono with a brain in a jar.

Transported to the nightmare realm?