Repose in a Dream 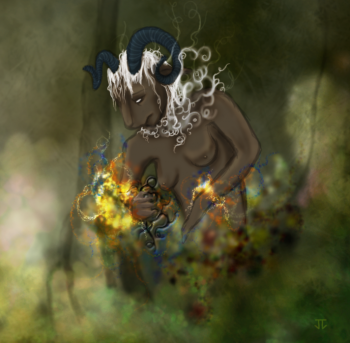 Brilla: After the very lengthy battle with the gibbering mouther, we were left to gather our composure and realized that Gorono and Serko were under the influence of the dreaded brain in a jar. After an appology by Nathaniel we were left to examine our surroundings. Gorono informed us that there was a citidel somewhere on the island that housed the mastermind of the dream enslavement that plagued the island. Not wanting to run into any more of the minions of Xannifer, we sent my raven to explore the dreamscape.

The raven eventually found the citidel and I described where it was located. Gorono was familiar with this temple and told us that the blacksmith, Igoriana, was there along with others that are emntally being kept prisoner. He also informed us that there was a portal much like the one we arrived in that entered to the center of the sanctum. We decided going to that portal would give us the best element of surprise and we would hopefully meet the least amount of resistance.

I also recieved a cryptic appology by Nathan. I'm really not sure what he was talking about.

Fuelwen: I do not care for the dream world, but again- there are hints that it could be an avenue to my goals. In any case, after our battle, we learned the details of life on this island, and the citadel kept them enslaved in nightmares.

Return to a Waking State

Brilla: We all, in one manner or another, returned to the material plane. I once again sent out my raven to scout the area ahead of us. There was a small clearing that seemed to be where there was some regular travel. We made our way through the woods, careful to avoid being seen by the flying beings above. Once there, we had to clear our minds and reach a blank, restful state to enter the realm. We all eventually did, and them we found ourselves in the belly of the beast.

Fuelwen: A frontal assault was out of the question. Especially when Gorono related some of the defenses. But there are two gateways into the dream plane- with Brilla's birds, we were able to find the second gateway, a direct access to the interior of the citadel. With the external defenses bypassed and a night spent recovering, we made the attack.

Breaching the Citidel of Dreams

Brilla: We arrived at a small hall with four doors, one of which being the main door outside. We took our time and listened around, hearing only noises from the door to our south. Knowing that the majority of Xannifer's forces were outside, we did out best to pin the door shut. Once we were confident that the door was secure, we broke into the southern door (after a failed attempt at being stealthy). Inside we found two lurking stranglers and Igoriana. The stranglers were easily dealt with and we came to free Igoriana from her bondage. It seems, though, that she was under the mental control of Xannifer and the only way to save her would be to kill Xannifer. Interestingly, the thing that she seemed to be a blacksmith of was a sort of dream stuff. Though I really wanted to take the time to study what she was doing, we had no time and proceeded to the northern door where we knew we would face Xannifer.

We once again tried to be stealthy but failed as before. Xannifer was protected by two more innocents, Livia and Solto. We did our best to nutralize the duo without killing them. Surprisingly, Nathanial's hag eye took Solto out of the picture while Solto was a bit more of a problem. Notably, there were some "dream spheres" that surrounded the tables and bursting one would result in killing the dreamer.

Soon after combat started I was unable to to get a clear shot and there was no room to engage in melee so I retreated to where Igoriana was began to form dreamstuff to make a useable weapon. By the time I was able to bend some of it to my will, though, the fight was over and the rest of my companions were victorious. I was never much at combat to begin with. I had a feeling my natural talents would shine soon enough.

Luckually I was able to maintain the dream stuff, and I think I'm going to try to mold it over time. Perhaps it can come in handy to create some sort of device to detect the dreams of those missing in the ninth circle.

Fuelwen: Room by room. The kitchen first. We cleared the guardians, and found one of our targets- the dreamland blacksmith. She gave us the layout of the citadel and explained who was where; with that information, we made our way through the citadel. Next we handled the treasure room. We barred the exterior door to prevent reinforcements from outside. We found Xannifer guarding her captured dreams.

All were dispatched, but I had less to do with it than I would have liked. Bo, on the other hand, is a beast in the dreamworld.

Freeing Tits McBoobies and her Friends

Brilla: With the main villian dead, we were now left with how to get everyone else into a safe room while avoiding combat with the more monsterous minnions Xannifer had. To meet this end, I ended up borrowing Nathanial's hat of disguise to make myself look like Xannifer. I began by commanding the two defender she had into the smithy. The other two were more the challange. Through a series of trial and error I found a good combination of guile and wand of suggestion to have the halfling leave her post and Ves to return from the outside. Once everyone was secure we raided the now poorly guarded treasure room. The Lurkers fell easily and the plodding mimic was easily led through the winding "dream sphere" room to where it was taken down by ranged weapons. Treasure was gotten and we now prepare ourselves to return to the material plane.

Brilla managed to procure some "dream goo". An an action point.