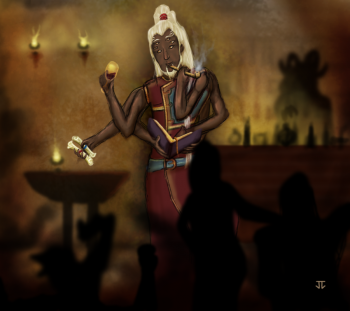 Fuelwen: The Pink Priaprism acts like chum. Trouble seems to smell it, and hurries in place. Whether the trouble is paperwork or the more esoteric varieties, that varies. I spent days fighting the local government and attending to the mundane details of preparing a bar for business- an investment of time that may be wasted entirely. An investment of money was wasted on Rake's "religious" activities. The less said about that, the better. But it serves as a reminder: don't leave Rake unsupervised. Fortunately, he doesn't manage his finances, and I can restock what he consumed.

Nathaniel: It should be noted that despite his brawn and bluster, Rake is at his heart still a child, though a feral one. Ethyl volunteered to identify several unidentified magical items, so with a stern warning I yielded her the use of my body. She collected a few of her own outstanding debts and set about identifying our strange items, except the flipping coin. Some mystery must be kept to keep life interesting.

Her answers to my ring yielded a fearsome answer. The damage that it has been absorbing will eventually cap, returning the damage to me in one mighty blast! Fortunately there is a way to let off the steam, and reduce my odds of perishing. The drink of life from a pure-blooded sentient creature will abate this threat—for a short time.

Fuelwen: Despite not being open for business, Killibron made a pest of himself, demanding to learn the details of the bar. He barged in, drank my stock, attempted to steal a chair, and generally annoyed us. Still, his curiosity matched to my own- he wanted to know more about how the magic of this bar worked. And he had a generous purse. My time on the docks an Gnala trained me in avarice- anything can be bought. At his insistence, we prepared the bar for another trip to its other worldly target.

Fuelwen: And we went, along with another guest- a wealthy local. By turning the bar into a traveling adventure, we could make a great deal of money- money that could finance my quest, or raise an army. And, the more we work the mechanisms of the magic, the more opportunity we have to learn their secrets.

Speaking of secrets, Killibron explored the pocket plane. He established its dimensions and some of its mechanics. He told us a bit about his gods- gods who walk among the stars, giving me another place to consider in my quest (his home island hosts a number of these star-walker friendly clergy).

He couldn't answer all my questions about the tavern's magic, but he implied that it could be used to achieve my goals. Only the hags would know for sure.

Nathaniel: Killibron and I walked together as far as we could away from the tavern, soon discovering it's boundary. Killibron explained that the tavern was not moving to another physical location as much as it was moving it's planar location. Specifically, it's own demiplane.

Mysterious trip to an unknown jungle

Fuelwen: We returned, and spent the next day going about our business. In the evening, we set out to leave the tavern- and the first of us through the door vanished. Bo and I were smart enough not to fall through immediately, but we ventured after the party. The doorway to the bar had become a portal to another plane.

This time, we found ourselves in a jungle, beset by frustrating pests- imps upset by our presence. We fought, they thrashed us soundly, and then flitted off into the jungle, laughing.

Now we're trapped in a jungle, with no idea of how we may return home.

Nathaniel: I had made arrangements to get legal advice from one of the local lawyers, Domingo, and once he arrives I left the building so that we might talk in private. However it seems that the doorway led not outside the building, but to some strange jungle. We were surrounded by imps whose drowsy touch set my companions to sleeping. As I do not sleep, I was unaffected. Realizing that they weren't going to be able to get us all to sleep, they flew off in frustration.

This tavern seems to be the key to unlocking my trip to the Great Whale. I still hear rumors of Sekolah hunting in the West, but now I have several possible options: Killibron's home island, and the Hags both show promise. I'll keep hunting.