Siyrt: The humans, old and stiff as they are, made their way back to the safety of the First City. There was much rejoicing. The archer appeared to be a bit forlorn about something. He mentioned his family briefly, and little else about it.

The Altharian has a vendetta against me. I find him most unreasonable, as I'm sure many others do. I shall try to harbor no ill will against him, as I know he is blinded by his hatred of the scalykind to the south. Perhaps in time he will come to be more rational. If he brings harm to the followers of the Fire Dragon, though, he will soon meet his end.

Kweto Lucullus I doubt I’ll use Surt for my next set of armor. He’s too shiny and thin skinned to provide cover. Met a charming lass while looking for Jayvin’s son. I would have been happy to tumble her if she hadn’t brought goblins. Hard to tell if Belos shot her on purpose or by accident. 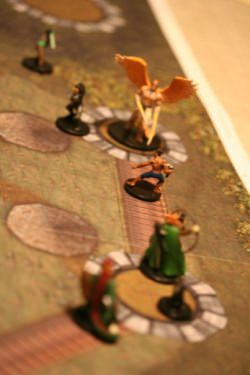 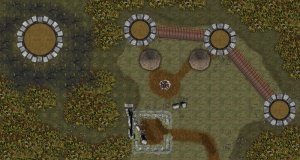 Siyrt: Jayvin mentioned something about one of his hatchlings. Seeing how this was an offspring that he highly cherished I decided ti was in my best interest to go along with him, especially since I have sent word that there is a fire temple that the humans can't reclaim; a clear sign that it is meant for our clan to gain as it's own!

In our travels we were stopped by a goblin called Frisky Whiskers. Jayvin accepted the premise of a bribe to get information about where his son is. Given proper directions, we set off.

We eventually ran into what looked to be a naga/human hybrid with wings. It's song entranced some of the group, though its suggestions fell flat. Belos shot an arrow and it quickly flew away. Goblins soon sprung from the abandoned towers and assaulted us with crossbow bolts.

To try and garner some favor with the Altharian I gave him the ability to fly. With some more assist I was able to get the rest of us up the tower quickly. The goblins were experts at taking cover and proved difficult to kill. One appeared to be especially adept at attacking the Altharian. Through it's valor in combat I decided to let it go, admitting taking slight enjoyment in the sound beating it gave.

The winged abomination eventually joined the fray and did great amounts of damage to the group but was eventually taken out.

We soon explored the area around the tower and found it was inhabited by many humans, one of which was Jayvin's son. They had strange slug creatures growing on them. I held them above the nearby fire, cutting open the sacks of flesh that held the slugs. They sizzled and popped.

We decided to have a parade when we went back to town with the head of the abomination. It seemed to cheer up Belos a tad.

Kweto Lucullus Stupid goblin nailed my foot to the tower. After I disemboweled and shot the lass we found Jayvin’s son in her heavily trapped tower with a hive of slugs. Lots of victims that had to be purified. Belos really seems to enjoy killing these things.

Siyrt: Our travel next took us to Enpebyn. The people here are less than friendly. When I was offered to take my leave to meet a great father, I decided to go with them. I am still learning the ways, customs, and phrases of the human lands, and finding another great breeder is a good place to start.

Upon meeting Father Quintis, though, I was a little disappointed in how they used the term fahter, but their heart is in the right place. I let him know he needed to focus on having many children since he was blessed by the gods, and he gave me a polite nod.

He gave us a mission to save what I assume are previous companions of the rest of this group. We are headed into rival ss'ressen land. I am very excited by this. I once had Emerald Scale eggs. I have never had anything with such flavor in my life. I am very excited to be eating their kinds eggs again. Perhaps I shall enlighten my companions by giving them a small feast if we can collect some.

This shall be a good trip.