Reba: We all got some texts from Fe telling us to meet her at Brewed to talk about our differences. Only me and Becca showed up. Turned out James was under a spell, and Fe's partner, a flaming redneck asshole was raising Cain in Achilles Meal. We found out Fe's some sorta 99%er revolutionary.

Markos: Bad night. I was working at the restaurant on the late shift, it was between the dinner rush and the stoner rush when the meta-Flamer comes in for a throwdown. He started by lighting the place on fire, my Uncle Z was in the back, so I had to take care of that first. By the time I started throwing blows back I was already out of the fight. In the end, he beat me bloody and destroyed my Jedi Gauntlet by melting it all over my hand. He also wanted me to give a message to the group, to stay out of the evil guys business. Fat chance.

Enchanted Dollar Bill for the Hobo

Sneaking Through the Junkyard

Reba: The spell lead us right to the Junkyard. We had to wander around a bit before we found the spot of the Ritual. Sofa King was in the middle of a big bad voodoo circle, and Lamar was on the Altar about to get all sacrificed up.

Markos: We followed the million hobo march to a junkyard. We snuck through much of the yard without any serious incident. We found the Sofa King in the middle of a giant trash summoning circle. 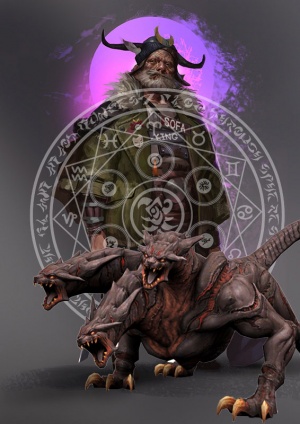 Reba: Cerberus started raising a fuss, so we had to put him down. Poor doggie. I dropped a car on one of his heads, and the Becca set him on fire. I reckoned that we weren't going to get far with Cerberus trying to eat us. Sofa King kept throwing trash at us, but we managed to drag him down until Sousson-Pannan made a run for it.

Markos: While the rest of the group was handling Hades guard dog...why he was outside the gates of hell I didn't know, I went after Sofa King. I started by using my Mr. Clean Filth Fighters to disrupt his summoning circle, taking a lot of oompf out of whatever he was trying to do. Once that was done, and without my Jedi Gauntlet to help me set up for a take down...well that's an excuse, after the Flamer battle and walking half across town to find James, followed by the long trek around Mordor just to get to Mount Doom...I just bum rushed the Witch-King, I was hoping to keep his attention long enough for the rest of the fellowship to take out his Fell Beast. He got me trapped in rubble, animating it against my fellowship when they came to aid me. I must admit that there were times when I thought we were finished, that the Dark One's plans would come to fruition and that the Realms of Men would fall. After great toil, however, we prevailed and threw down the Witch-King.

After filling in all three recaps for the Dumpster Baby storyline, each player gains +1 to their Sneaky approach.