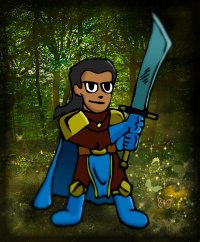 Interpose (Ex)
When an enemy threatens him in melee and makes a successful attack against an adjacent ally of his, Dario may take the damage (and other effects) of the blow as if he had been hit instead.

Smite Evil (Su) 2/day
Swift action; evil target w/i sight; Duration until target slain or rest
+Cha to hit and +level to dmg. If target is evil subtype, dragon, or undead, the first hit does 2 dmg per level.
All smite attacks bypass any DR the target has
+Cha deflection AC from target

Lay on Hands 6/day
Heal 2d6 with a touch. Swift action to use on self.
May be used as touch attack to harm undead (No save)

Weapon and Armor Proficiency
Paladins are proficient with all simple and martial weapons, with all types of armor (heavy, medium, and light), and with shields (except tower shields).

Deft Dodger (Trait)
Growing up in a rough neighborhood or a dangerous environment has honed your senses. You gain a +1 trait bonus on Reflex saves.

Magical Knack (Trait) (Paladin)
Pick a class when you gain this trait—your caster level in that class gains a +2 trait bonus as long as this bonus doesn’t increase your caster level higher than your current Hit Dice.