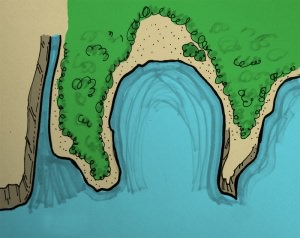 Pitor: There I stand, staring over the captain's destroyed body, with Brenton babbling on about how I'm a killer. Absurd to the point of absurdity… wait, bad wording. Still, absurd. In any case, the Hammers restore order.

There was much talking, and accusations were tossed like daggers. Suspicious, I pulled Amabel forward. She seems to have the gift, and she was greatly afraid of Billy and the Goat. When pressed, she claimed they were possessed. It wasn't good enough for the King's Court, but her words kindled the affair until Billy leapt from the ship and was lost beneath the waves.

Any mortal man would be thought dead, but I have a strange feeling that we haven't seen the last of whatever Billy Yonder has become.

Falcon - Blur of action and then yelling. The hammers rushing the decks to take control I found myself have crossbows level at me and orders stop or die. Not much of a choice. We climb down from the mass to find that bastard Yonder rush the deck leaped into the sea. I let a arrow fly but my aim was not true. Magic was use the a twister in sea caught him. Everybody seem think he is done But I do not. One day we finsih a our battle..

Pitor: I think I was the only one aboard the ship not enchanted by the sight of land. I've had sport enough the past few days, and everyone keeps tossing out… that word. You know the one: "work". I think the scouting team will be quite a lark, but others seem to think it a grueling task. I'm not really cut out for grueling.

We make camp, and the next day, our intrepid band sets off to find fresh water at the river. Along the way, we come across signs of habitation. My mind drifts to tawny, muscular island natives prone to wearing little and without our noble sense of modesty. At least, I hope that's what we find. It seems a small prize for the hardships endured thus far!

I am jarred back to reality when we stumble across a corpse of some gargantuan creature; a legendary beast of reptilian form, but not a dragon. I collect its skull. As we return to camp at night, I resolve to stay awake, and tap into the primal, tribal eneries of this area and carve the gigantic skull with primitive, feral, tribal patterns.

Part of that primal energy arises from the battle with scavengers upon the corpse. I'm becoming a regular beast-killer on this voyage.

Falcon - Land Fall was welcome by all. Site of this new world brings hope and fear at sametime. As set camp and put to our task I found myself watching over shoulder in case my bitch anut has place bounty hunter on the ship on one the other ships coming to this land to do me in. I watch my back but pit will to my task. Track and scout this land with creatures great and small. Several encounter with the loacal wild life few scrapes. Then matter of the boy arry follow me like a little brother. I am only few years older then he. But a life time of differnet experince makes much older then I am.

Falcon - Upon return the leader base camp call us to task. One the scouting party had gone missing. We follow the hard trial to a buff where my eyes took a in creature of wonder called a hippogrif . With luck we found the leader of the party, with skill we made pass the creatue. But lives were still lost. They wont be the last..

Pitor: As intrepid and dashing as we were, Dario and his party was less so. They failed to return, and by the next morning, we set off in search of them. I would like to point out that, after yesterday's hard travel, my riding leathers are a bit… ripe. I must make it a point to bury them in the sand when we return- that should dry them and keep them in good form.

Me! Doing laundry. I'm tickled by it.

We wander about, tracking Dario's party, and find instead a hippogrif rookery. These noble creatures are extinct in Cyrilmoore, but they seem to be thriving well here. Dario's insensate form lay in our view. Falcon and Sedeq played the Alpha-Male hero and went up to rescue him. I refused to be sidelined- if nothing else, I can be a diversion!

Falcon - On one of many taskings we came arcoss cave that held small treasure and living stone. I might have to go back there on my own. That cave and it riches could do much good back home, I will revist when chance will allows...

Pitor: One of my trunks seems to have wandered off. I'm sure it'll turn up, but it means I'm short a few clothing changes. I do have a rather rugged hunting outfit which I can use to spell my riding leathers. I specifically chose it because it's about a decade old, which puts it into that archaic fashion phase.

We wandered about for days, exploring caves packed with gems (I briefly flirted with the idea of sharing them with the entire expedition, but the party rightly agreed to keep the secret for now).

Wind swept the deck and rock-faces looked on, "Will Billy or Falcon be taken to task?" wondered those gathered, Winsome Amabel, with the gift, saw the truth of the matter, With an embrace, the ocean accepted Billy to its bosom.

Land! Legs fled the deck and became trees in the soil, Leaving camp, the heroes explored the terrain, Legendary creatures are there in the rocks, the trees, and the swamps, "Look there!", cried Falcon, "Life! There are natives in this land."

Falcon — Lay of the Land: Your intense attention to the world around the colony has given you a deep understanding of the area. Falcon gains a +2 circumstance bonus to Stealth checks within a few miles of the colony.