Chapter 3: The Hooksaw Massacres - Part 3: Down Comes the Rain

Released from a broken seal

Too many live lost

The church bell would rings it's toll 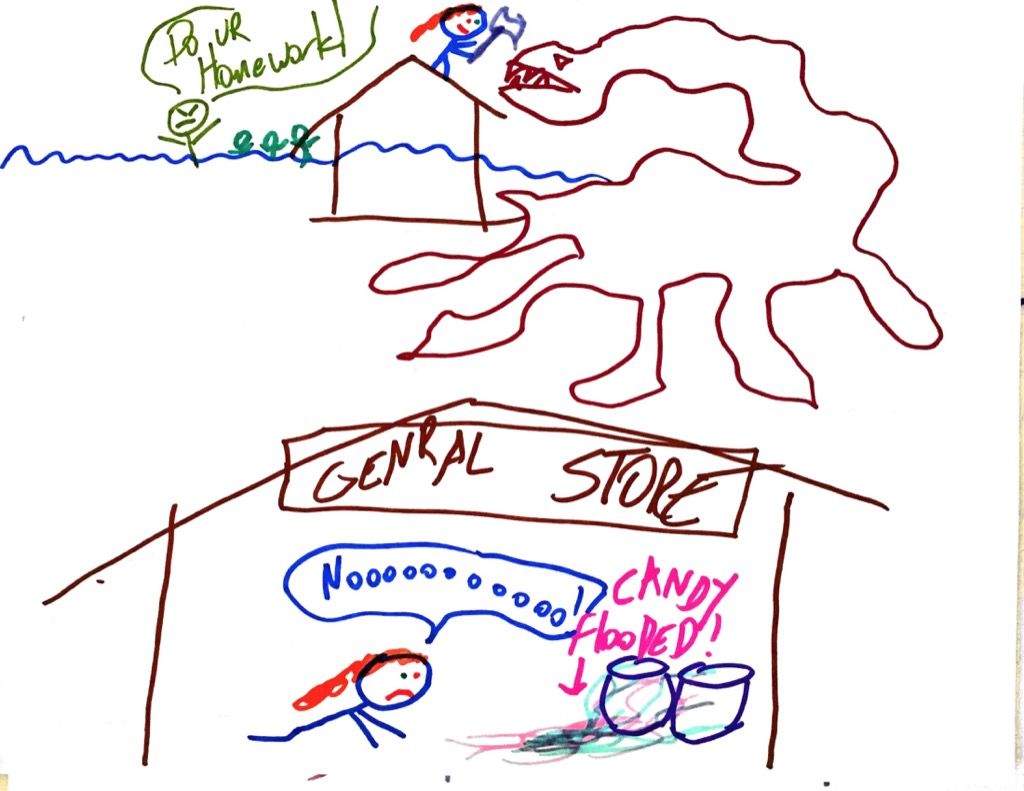 Isra'a
The heavy rains of late were causing the town of Turtleback Ferry to flood. Sticking to our typical ‘do-gooder’ theme we set to work helping the townspeople. While we were evacuating the school mistress and some of the children a creature from another age appeared, Black Magga. For ages the beast had lived in the Storval deep, but the heavy rains and sabotage to Skull’s Crossing had allowed it to slip over the dam.
I would like to say we dealt with it with our usual flair – no, we were soundly defeated. It was only a minute and we were lucky it was so brief. It wouldn’t have taken the beast long to mow us down and devour the town. I suspect in the coming months something will have to be done with the creature – it can’t continue to live in the lake.

A great beast rose from the water and threatened my companions and the town of Turtleback Ferry. Unfortunately it was beyond my skills to defeat. Perhaps their are some things that cannot be eaten? Yet it left the town and the people are safe for now.

to celebrate life and loss

Isra'a
Despite our failure to kill Black Magga the town was safe and its people were in the mood to celebrate. Love (or lust) was in the air – I somehow managed to make what should have been some nice downtime into a rather large mess. Of course I would be seduced by Erylium – I’m her favorite plaything. It isn’t all bad, I feel much more limber since the encounter… I’m sure there isn’t anything else.
We did decide that we would have to investigate Skull’s Crossing – the town shouldn’t have flooded. The dam should have been regulating the water levels, looks like we would be heading north once more.

Today I learned much about my limitations. While I would do anything for those who I travel with, and am a strong swimmer, I am not adept at fighting in the water. A town flooded and under seize by a monster is a greater challenge than expected. The monster was driven off? I suppose it is possible it simply left on it's own. I was able to leap from roof to roof and help evacuating those trapped by the water, and they seemed happy afterwards. There was even a celebration. I never know whether I am welcome at those, but my companions seemed to enjoy it. Israa made a new friend? But I doubt that she is good for him. Still to share a lover's embrace with someone cannot be all bad right? Tomorrow we go to seek the source of the flooding. Hopefully I will be able to contribute more there.

That which builds structure became

It has been said that

two heads are better than one 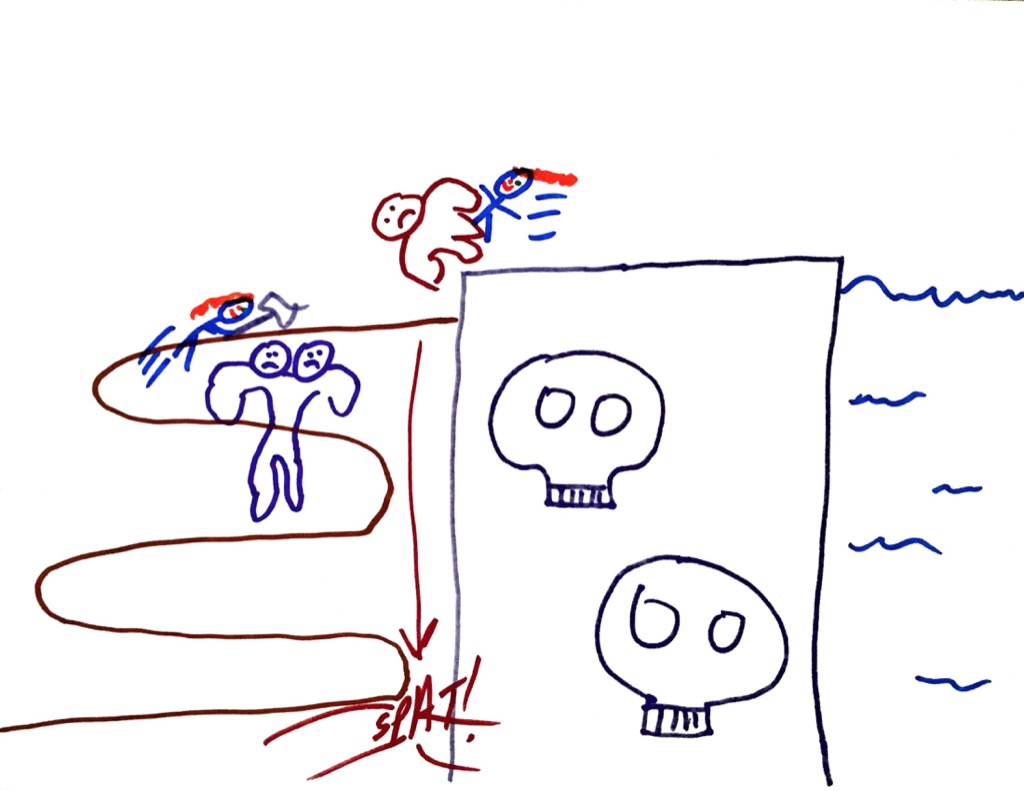 Isra'a
We traveled north to Skull’s Crossing – the enormity of the structure was certainly impressive. I can only wonder at the power it took to construct such a thing, and we are searching out these things? We followed a path that looked like it led to the summit; part way up the path gave way to a cave. Inside we encountered an Ettin – part bruiser, part zealot. Luck was on our side – as the creature seemed to be split on its’ tactics, it could have been far worse. It pressed attacks that it shouldn’t have and ignored things it would have been better off paying attention to. It wasn’t easy but we put it down.
We emerged on top of the dam – the vast expanse of the Storval Deep to one side, a 300 foot drop to Skull River on the other. We encountered an ogre demolition crew – they had managed to damage the top of the wall and this is likely where Black Magga had spilled over. They proved no match for us and we continued on.
At one point during our trek across the top I felt the urge to dive off the side of the dam – I’m not entirely sure why, but it seemed like a fantastic idea… maybe I’ve been spending too much time with Haneet.

The dam was truly a marvel of construction, ancient and well made. Yet there were ogres attempting it's destruction. And a giant with two heads challenged us as well. We defeated them, but repairs to something this great are beyond even the abilities of my amazing companions. We need to find a way to relieve the pressure.

Isra'a
In the middle of the dam sat a control room of sort – decorative stone work rose out of the walkway. We entered and found it mostly in ruin – moss and other plant life had taken root inside. One wall was broken, exposed to the massive lake. Trolls had taken up residence inside the structure. When they saw how soundly we were beating them, they surrendered to us. Once again we made unlikely allies – a deal was brokered with them to provide protection and basic maintenance. It was also stipulated that they must allow crews from Magnimar to perform repairs on the structure without interference. Seems like a good deal – especially since the alternative was we wipe them out.
We still needed to find a way to control the dam and relieve the pressure of the storm waters. There was a barred door that led downward – having no other leads we ventured that way. The stairs opened into three chambers connected by pools of water. In the room to the left were some manner of control levers – and a construct. Haneet ran into the room and was overcome with fright… I, for a change, stood my ground. That ground was quickly over run and I was grappled by the Skull Ripper. Hilma kept me alive while Karaz beat it down. Now, I am told that while I was busy occupying the attention of the skull ripper – Tokki was in the other room putting a world of hurt on another troll. I saw the body – so the story checks out.
I was then summoned back up the stairs – my favorite demon wished to speak with me alone. Erylium had transformed, apparently she is moving up in the world and had been promoted to Succubus. Good for her – I almost feel like I’m responsible for it. She informed me of three things – first her new form came with a new name Punkin’ Tits… see this takes the fun right out. If she is going to call herself this, I’m inclined to find another name to call her. Second, our current missions aligned somewhat with her agenda – she wouldn’t be actively trying to stop us. Hooray for that, but I’m not sure I am terribly comfortable with acting in alignment with demons. Finally, she desperately wanted to know the name of the pit fiend – I have no idea what she is talking about. But she promised 2000 gold if I could find it out.

Inside the dam were trolls, but unlike others we have been forced to destroy these eventually became allies of a sort. Without a leader who knows if it will last? I asked how one becomes leader of the trolls, but got no response. Perhaps if my companions reject me someday I will come back and ask again.

Isra'a
After some investigation it seemed that the controls would work the slues gate – but there was nothing to power them. We needed to find out how to power these things

Isra'a
Find out we did – what a power source. It seems that the gates were powered by life force and now I know what PT was talking about. She wanted the name of the pit fiend held captive here. So I am utterly transparent and the fiend was in no mood to give up his name; especially since he could sense my encounters with PT. Demons and devils are different apparently – near as I can tell a devil is Tokki and I’m a demon. This might explain why PT is so fond of playing with me. Anyway, this turned into a huge moral debate on what to do to power the gates. The second pit fiend had died and the remaining one would likely die if we used him to power the system.
We made a deal with the devil – Haneet made another for some coffee – I got his name and we ended up using Gnome power! We were surprisingly effective…

It seems the dam ran on magic. Never my strong point, but my companions figured it out. I admire their skills in such things. Lifeforce was needed to power the mechanism, and the creature remaining had little to give. I would have given mine if needed, but I could not make that decision. My allies determined what needed to be done and I went along. Haneet got coffee from somewhere unknown. It seemed to make her happy. Maybe I should buy some for her?

Before before session on 21 May)
Limited, once ever as an SLA with no material components. Filled by those who noticed your interaction with the devil.

Late
Shadow Conjuration, once ever as an SLA with no material components. Filled by those who noticed your interaction with the devil.