Wild:01 Tale of the Teleporting Tavern

Brilla disguised as a desert kobold,

Gather at the Pink Priapism

Nathaniel I approached the recommended bar through the crowd of festival-goers only to find the inside a dramatic contrast, containing only the service staff, a kobold who seemed to wear the shadows of the room as I would a cloak, and a fish-out-of-water tentacled sahaugin who was bellied up to the bar.

I requested a room from the one-giant-armed owner, One Thumb, a touched merchant who seemed to have a kind heart. To help the time pass I made introductions and discovered the names of my bar companions, Durka, who it had turned out I had met previously, and Fuelwen, who was on an impossible mission of manhood. Soon after, a man of reptilian skin, Bo, entered and we befriended him, learning that he speaks very little. 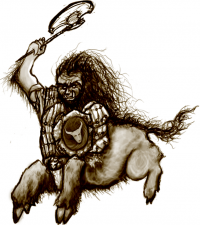 Nathaniel We heard the screaming before we saw the blood. Pushing through the door with one hand a gnome rushes in, blood spraying the drapes and then carpet as he collapses to the ground. Fuelwen and Bo jump up and investigate immediately and are met at the door by a passel of bwarves, who are in a rage and indiscriminately attacking everyone, and we respond in kind.

I leap to the table and begin to recite tales of horror, mixing it with my magic to frighten, demoralize, and loosen the bowls of the attacking swine. Fuelwen flails like a fish out of water, wounding the largest of the bwarves and dropping others. Durka melts away in the midst of battle, keeping at eye on a bwarf who gets past the line of defense. Bo's fluffy dog—his daughter's—proves to be battle-ready while Bo utilizes the powers of the divine from under a bar table.

Not in Kansas anymore

Nathaniel Once the bwarves were bested, Durka informed us that the loud scream we heard from the back room provides us with a mystery. While hiding, One Thumb had been stabbed in the chest with a dagger—the bwarves had no daggers—and Ethyl was missing. We began searching for her, wondering where she had hidden until we had searched the building from top to bottom. Peering out the front door, it came to our attention that the entire tavern had been transposed to a vast wasteland.

This transportation was perplexing and we approached the outside of the tavern with caution, fearing that when the last of us stepped outside the building it may disappear behind us. I climbed along the side of the building, hoping that my continued contact with it would root it with us. To the south of the building there was an oasis abut the tavern.

Our man of few words, Bo, appears to be fluent in shrubbery, as he conversed with the cattails. He recited to us that they speak of being crushed even as we stood there. Given the intellectual acumen of foliage, I surmise that it could be anything from an invisible opponent to an errant rock that recently tumbled.

Nathaniel During Bo's conversation, Fuelwen casually suggested that we burn the cattails. Weighing the idea irrelevant to current circumstances the group put that idea to bed, however Fuelwen became continually more insistent on that course of action. After realizing that shouting louder did not mean a more convincing argument was made, Fuelwen yelled a battle cry and charged the bushes.

Due to a rewrite, Durka wasn't here and Brilla was there the whole time.