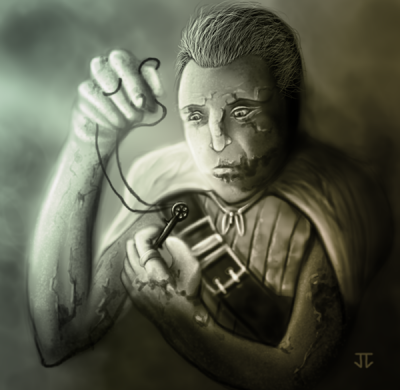 Fuelwen: We set sail without event. At first, I was most upset with Nathaniel, and was set on leaving him to his fate, but I realized such an action would be dishonorable of me. He was incompetent, not foolish, and if I were to teach him the ways of a predator, he could still find success. I made my aid, which turned out to be largely unneeded, contingent on him learning about being a hunter. (OOC: Randy, since Fuelwen didn't really do much to save you, you can move that skillpoint someplace else).

The ship, against all reason, was run not by a captain, but by a triumvirate. While all three of them were strong and powerful, the leadership style was the epitome of weakness. I hoped for an opportunity to slay them all, destroy the evidence against Nathaniel, and put an end to this ridiculous trial, but sadly, the opportunity never arose.

As no trip may pass without a violent conflict, were were attacked by psionic dolphins and an orca. I've helped hunt whales, much larger than an orca, but none that could match its ferocity. The dolphins were like those I've encountered before, except gifted with mental powers. I was overjoyed to have a chance to fight in water, and allowed myself to fight more recklessly than I might have otherwise. Even so, it was a great battle, even if the orca managed to flee.

Dhl: It seems tha we had us a group of weirdos on board tha ship, wif one of 'em being a murderer, or so we was told. The group assed a lot o' questions, most especially 'bout who was in charge. They seemed to not able to grasp what the werd democracy meant.

As we were travelin' we were attacked by a group of pussy jumpin' fish and giant tentacled seafucker. They was jumping and shootin' beams from their eyes. Sadly I was in me armor and would sink like a stone if I tried to jump after 'em, so I drew me bow and started firing. None of 'em even came close enough for me to poke wif my polearm.

Nathaniel: During the voyage I spent my time mostly be going over stories in my head, committing them further to memory so that I may recite them to my order. I also spent time talking with Fuelwen, learning the ways of a predator. Many of the physical methods did not apply, but psychological ones took root. (OOC: I'm keeping the skill point. Fuelwen, and everyone else, did a great job helping Nathaniel out.)

Brilla: The ship we were to sail to Drnn Tg on, the Querry Taker, was surprisingly swift for the fact it has some steel and stone in it's construction. Given the right wond, it could even outpace the Seawolf's Folley.

In exchange for passage, we had to do some odd jobs about the ship to make up for the crew that had to be left behind in our stead. For the first few days of our journey we were made to do odd task that weren't well fit for our capabilities. I knew I was put best to use in helping direct the other crew members, but instead I was made to peal potatos during the journey. Eventually they came around and I as well as everyone else were put to better use.

Though it would have been great to have the trip go without event, things never seem to go that way. We were attacked by a large group of jumping dolphins and an orca whale. They seem to have been endowed with psionic abilities, making them an actual danger to the ship and it's crew. I was quickly disabled by the orca and was not able to contribute much in the fight and had to hide below deck for part of the deck. I also had to try to mask my pressence since Nathaniel was below deck and I was afraid that he may still have a lust for pure-blooded beings.

Eventually I recovered from my disabled state, though the fight was nearly won by then. The orca was not defeated, though it was driven off and did not return for the rest of our journey. Hopefully we never run into it again.

Fuelwen: Preparing for Nathaniel's trial consumed Brilla's time. I had little to do in this event, and occupied my time exploring the city. Unlike Gnala, which is merely a center of industry, this city is crowded with residential districts.

Nathaniel: I prayed to Wee Jas that the inquisition would turn in my favor, as the motivation for my deeds were not malicious in intent. I wished to continue my existence and considering the drought of sufficiently powerful people of faith I was forced to take survival into my own hands, dictating a horrible sacrifice.

Fortunately we were able to find an expert on cursed items, who actually had a matching ring to my own. We also secured a psychologist to testify on the psychology state of survival. Fortunately the judge made a favorable ruling which (almost) absolved me and removed the cursed ring! However, henceforth I am to inform all dwarves I meet that I have slain two of their race. I will have to spend some time crafting my tale of survival.

Brilla: As soon as I arrived at shore and arranged to have the ore sold off at a reasonable price, I set to work on trying to find a way to save Nathaniel. To kill two birds with one stone, I set about a small party from my own funds to sell the starmetal I found as well as inviting Lord Lvn, the judge, to the party to find out more about him and maybe get an edge in the trial. The aution went well and we got a little over 15% more than what the starmetal was worth.

Most importantly, though, it that I was introduced to Morovian, a notable socialite in Drnn Tg. He had a brother, Dnkl, that recently passed the bar and would be our lawyer for free. Also, there was a collector of cursed items named Miles that would not only testify on the aspect of the cursed ring that made Nathaniel kill in the first place, but also has the ability and knowledge to remove the ring form Nathaniel's hand. In addition, we were points to a man named Tgnn that was well versed in the thinking of one's mind. These two were instrumental in the case becasue Lord Lvn favored the word of experts over witnesses. Finally, I joined Dnkl on council since I could direct him in proper wordsmithing and I could give him some insight about Nathaniel and the favorings of our judge. Also, I've always wanted to yell "OBJECTION!!!"

The day of the case came quickly. Our experts gave long and lengthy prose to Nathaniel's defense and was a tad boring, though Lord Lvn seemed to take great interest. Rake was not allowed to testify as a witness, so that was a great boon as well. I don't know how well his unique view of of the world would have transfered to Dwarven society.

Though we did as best we could in the case, Nathaniel was found to be guilty. His punishment was light, in that there was an implimentation of "Nathan's Law" in that he has to tell of his crime to all dwarves that he communes with and that his ring must be removed by order of the law. In case of war as well, he is obligated to serve in the dwarven military for 6 monthes. I'd say that this is a light punishment and one that I'm happy with.

Was taken out of slush already.

Fuelwen: Considering how often I use my bow, and the fact that I'm proficient in it now, the Bracers of Archery, Lesser have become much less important to me. I'm looking to turn them into cash- if anyone wants them, I'll exchange them for a little cash and favors. Otherwise, I'll sell it.

I'm going to swing through the docks and ask about fish that are in high demand- delicacies that may be generally hard to find, caviar etc. I'll spend at least one day hunting for those most desirable treats.

Nathaniel: Seeking out spells from prayerbooks or purchasing scrolls to add to spellbook. I will travel the city in disguise (with my convenient hat) as a chameleon dwarf.

Brilla: I'm sadly too poor to go shopping for anything useful. Darn warlock items are too expensive. I'll probably spend my time preparing for our cruise ship back to Great Fortress.