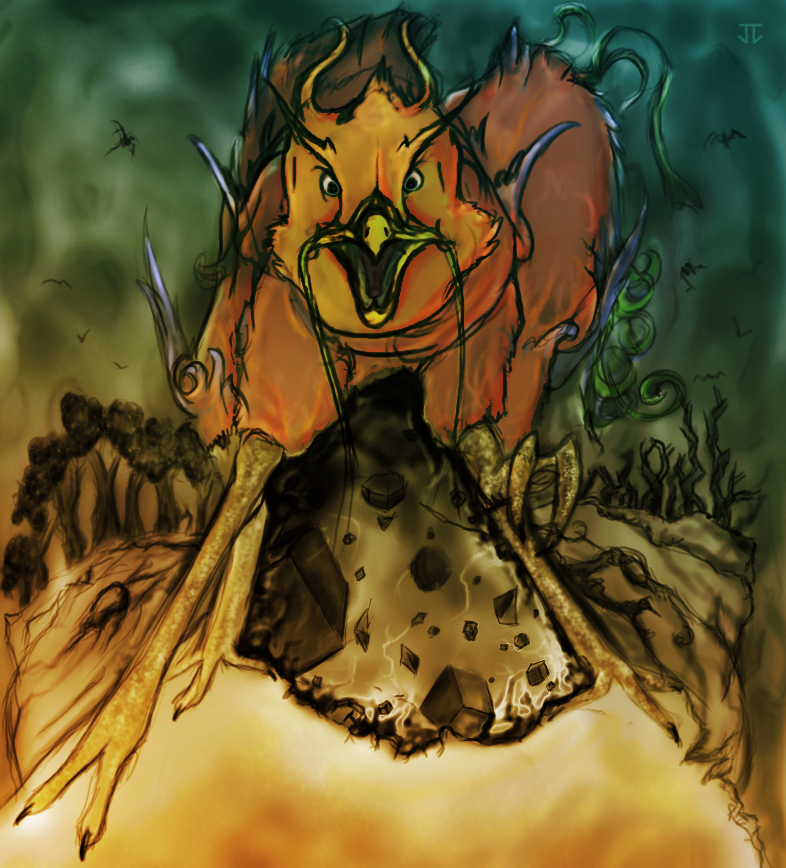 Fuelwen: I had reservations about returning to Gnala. I may not return to Algol-Nun until I have completed my quest, and Gnala is close enough that any Sahuagin that saw me would consider me Falkah- unacceptable. I warned the party that any Sahuagin must be killed on sight, but with Brilla's aid, I've made a disguise that should hopefully make it unnecessary.

As we approached, we caught the edge of a skirmish between the Sahuagin and the squeakies, and for a change, the squeakies signaled victory. Embarrassing.

Brilla: It was difficult to convince Bo that we should approach Gnala, but we eventually came to a compromise. I gave us a week on this island to get the information I need about my family and then we would travel to the dream world as quickly as possible. I believe that the direct planar instability would be key in us getting there quicker than by sail. I may be proven wrong, but we shall see.

Getting to the island was also quite an ordeal. The sahaugin were fighting some sea elves and we luckually had a friendly ship approach us that gave us warning. I tossed him a bottle of rum in thanks for helping us avoid what could have been disaster for our ship and headed the long way to the island.

I also found that Fuelwen was not quite welcome back at this island. He came ot me requesting a disguise, knowning that Nathaniel is lothe to giv eup his precious hat of disgusie. I did the best I could, not knowing really how to disguise someone of his race. There was little need to worry, though, as the sahaugin lost the battle, so I expected to see little of them on the island.

Fuelwen: We arrived in Rig Tig, one of the minor suburbs of Gnala. Not much, apparently has changed. I saw to the needs of the crew, while there. The others set about their own tasks. It was a quiet, forgotten town, although it seems Nathaniel had some adventures. After a night there, we left for Gnala proper.

Fuelwen: Back so soon? Not much had changed. The land-walkers continue to do their strange things, like unions and taxes. My first step was towards Carn's library. He was out, but I was able to learn a great deal about getting from Gnala to Acheron- and it meant a trip out to the wilding.

The following day, I did get to check in with Carn. He was a bookish as ever- I can't help but think of him as food. Even so, he had my favorite books ready at hand- chronicles of great battles and epic strategies.

Brilla: I spent most of my time researching where the portal can be found that would take us to Acheron. This endevor netted me the information that it was somewhere in the center of the wilding.

bo mentioned finding someone who has some experience in Dream-o-mancy or whatever it is. A bunch of sillyness, nut necessary none the less. Perhaps it's just not in my nature to grasp at some much abstract.

Fuelwen: Out to the wilding, we set out on the trail of Acheron without much direction. Curiously, we found what appeared to be a nest, and a short time later discovered its occupant- an achaierai. Between its legs was a flickering portal that showed Acheron behind it. Instead of fighting, we dove through- although fighting it wouldn't have been unpleasant, it wouldn't have gotten us to our goal.

Brilla: We set out into the wilding to find our portal.

On the way there we encountered a dire bear. It appeared to size us up for food, but throught the better of it as we may have severely wounded it in a fight, even if it would win it's meal. For a brief second I considered calling Camille, but luckually the situation resolved itself.

We eventually encountered a sentient dire chicken called an achaierai. It's outsider nature had it dragging a portal to Acheron betwene it's legs. I called it over in Infernal and told us it's intent. It said we may enter if we can, and attacked us. We all made it through successfully, though some of us got "nipped" by it's giant beak.

Fuelwen: We landed on a gleaming titanium cube. Our very first meeting was with Tall Tally, although he did not reveal this. When Brilla asked her questions, he told her that Tall Tally was the person to see, and escorted us to his office. It was all a tricky game, of course. There we met his mage Ollisan and his barristers, who put us back on Tally's trail.

I must be honest: I like it here. All this talk of war, the epic unending battles, the harsh and unforgiving environment. Tally made me the offer to be an officer in his armies, but as one of his devils. Never- I fight and live and die as a Sahuagin, nothing else.

Still, a good battle- not the continual slaughter between orcs and goblins. Maybe the slaying of a great beast, like the archerai. Being here, I feel the need- the compulsion to test my skills. I will not disrupt Brilla's mission, but should the opportunity present itself? I would be most pleased.

Brilla: I find an unexpected bounty in this place. The hairs on my neck stand on end. I can feel the vile Lord's presence that once lingered here, a black mark in my familys lineage, but a strong mark none the less.

Oddly enough, there is a certain kinship I feel toward these devils. Perhaps it is in the knowledge that they helped drive abck some of the devils that once threatened Baradin. The one we ran into Tall Tally was a joking sort of bone devil, mostly harmless and questionably helpful.

I gained knowledge that my ancestor once fought for the orcs on this plane as a great general. I plan now to visit the orcs and gain more information. I am on a time limit to do this, though, as another cube will soon come and smash into this one. I know the petitioners do not have to worry about absolute death on the plane, but I have a feeling we are not so lucky.

Knowing of the trials the Fuelwen has to endure, I hope we find a great threat that he will have to slay. I feel that in doing such will bring him one step closer to fulfilling his prophecy. It will be no Great Whale, but it will be the practice and insight that he may well one day need.