TskTsk: We are led by our defeated foe to an area filled with tents and mammals, ringed by stone walls covered with thorny, tentacle-slicing leaves. The mammals are the Celestians we have been seeking out, and there are only 17 of them. The cower before us, which confuses the clutch mother, however Fuelwen and I understand that they hide like prey. We are apparently the first outsiders to visit them—ever.

A gray-skinned humanoid with goat horns floats over towards us, warning us that we must leave for the Lady of Pain is coming. Apparently she can kill things with her mind. I am unconvinced but I allow myself to be coerced into leaving, with the Celestians in tow.

Sadie von Masoch leads us to an exit and it's obvious a favorite of hers. I jump through the thorny plants and emerge torn up on the other side in a city.

Brilla: Ouch... ouch... That was not entertaining. My hair is also full of dirt and twigs. Oh, wait, let me guess, they drug me here. ::sigh::

It looks like they were led to the 17 Celestians. At least something good happened when I was out. They seem to fear us. I can understand why, dragging an unconscious woman behind them and looking as monstrous as they do. At least things were under control by the time I got my senses about me. And then came Bo crashing into the scene.

Surprisingly the Fey Basher didn't bring an angry horde behind him. Of all things, he quickly took charge. I'm REALLY not used to this. I think that Petal swing harder than I remember.

We quickly took psudonames given by Bo and pushed our way through some razor vines. Barely capable, the group took it upon themselves to throw me through as opposed to healing me first. Vagrants, all of them vagrants.

Fuelwen: Battered from the battle, we trucked on to find the seventeen Celestians. Each is tied to the outer planes in some fashion, and it doesn't take much research on their part to determine their role in the ritual- each must be sacrificed in their linked plane. At first, we suspect that this ritual will take quite some time to complete- my dungeon has those links, but most of the portals are inactive.

The horned creature guarding the Celestials tells us that a) the Lady of Pain is coming, and b) she has a secret exit to Sigil. Since this conveniently solves multiple problems at the same time, we take the secret exit.

Splat: Wait… sacrifice? Can I give them shiny rocks and make them give the shiny rocks up? Because that'd be a sacrifice, right?

Sigil, the city of doors

TskTsk: The Celestians exit the portal on death's door. Our elder calls upon his gifts to heal their wounds. As everyone does a headcount I go to the end of the alley and find a drunk tiefling woman and wake her. For coin she helps to guide us to an inn by the name of Planars. The place has a halfling feel to it, with a single common room on the second floor.

Some of the locals strike up a conversation with me on the topic of power and struggle and competition. Splat hovers/rolls over and is equally as interested. The group is called the Harmonium and they fight against the "bad guy", as Splat would say. Might makes right with them and that resonates well with me.

Brilla: This place is interesting. A guide that cost us a bit of coin and takes us to a inn made out of planks. Inside were some propaganda spewing folks that took the ear of Splat, Tsk'Tsk, and Fuelwen. If my schooling holds, they are the hardheads. Splat took the bait hook, line, and sinker. Tsk'Tsk is greatly intrigued, but since the group was resistant to a long travel to fight his dragon problem, he didn't sign on the spot.

Splat: Like, holy crap. The Harmonium is awesome. They're like ninjas- they fight ALL THE TIME. And when they aren't fighting, they're being AWESOME. I let daddy wander off to do whatever, and I join the Harmonium to be AWESOME. And I blew up some bad guys. And one good guy, but that was an accident. Mostly. He laughed at my helmet.

I HAVE A HELMET NOW. Helmets are cool.

Guide us to the evil portals

TskTsk: Our original guide finds us a better one, for a fee. The new guide, who the elder dubs "Positive", can lead us to all of the evil planes we need to find.

Brilla: Tsk'Tsk is no longer allowed in official buildings. After the laws of the Govners drive him to madness, he tore a book and was under the threat of disintegration. He eventually came off the wall and payed a fine.

I was eventually able to cut through the red tape and get to the vault we needed to access the portal. I stayed outside under the guise of keeping watch. In honestly, I don't have the stomach for what we are doing but I know it is for the greater good.

TskTsk: The gate to Acheron was housed in a prison.

TskTsk: Fuelwen and I passed through this gate, where "the shark" devoured our sacrifice. A guard, a pit fiend, blocked our departure back to Sigil. He demanded trade to our passage. Fuelwen agreed to return to Baator in the future. I offered the guard a chance to help me defeat my most hated foe. Lo and behold the monster accepted! He granted me a rather large coin that I will use to summon him forth when the day of battle comes.

Fuelwen: I escaped Baator with a simple payment- a promise to return during my natural lifespan. It's a thing that I would like to do anyway- although I suspect that the Pit Fiend will have something unpleasant in store for me. In retrospect, I should not have left so quickly- Tsk'Tsk made a rather terrible bargain with the Fiend. My best efforts to explain to him why this is a terrible idea have gone unheeded.

Gehanna and the Gray Waste

TskTsk: Carceri's portal was well known but the method to open it was difficult to do. We had to have an execution staid in an arena not known for leniency. It is shocking to inform you that Splat, yes, Splat, proved invaluable to this.

Fuelwen: It took a surprising amount of cajoling to convince Splat to help us.

Splat: Duh. I mean, you're just going to sacrifice a guy.

Fuelwen: To save the world, I might point out.

Splat: Yeah, one of them. A crappy one. SACRIFICES ARE EVIL.

TskTsk: With summoning coins on my mind, I use Charles' minion as a distraction to enter the Abyss. The minion is much weaker than he was previously and spare no further thought to having spent my summoning. I have a much better ally for my fight with Daudir.

Brilla: Making a Govner admit they are wrong is a quite the task. After a few hours of debate we finally got one to admit they were wrong. I now somewhat find these people insufferable. They could madden someone from Mechanus.

TskTsk: Finally, after hours of debate and Fuelwen's refusal to allow me to torture a confession of error out of someone, we open the portal and venture into Pandemonium...

Splat: I fight for goodness. Daddy fights for not-quite-so-much-badness. We have mind-squid-faces and devil-babies and… I'm a HARDHEAD. Helmet and everything. Daddy wants to go to the Temple District to go get more shark-worshippers. I'm going too- I wanna talk to a good priest. I'm confused.

Wiki update: Brilla/TskTsk/Fuelwen: one weapon becomes enchanted +2 with a designated home plane of the outlands. (IE, it's a +2 on the Outlands (including Sigil), +1 on other outer planes and the Astral, and +0 magical on all other planes (Prime, Ethereal/other co-existant, inner). 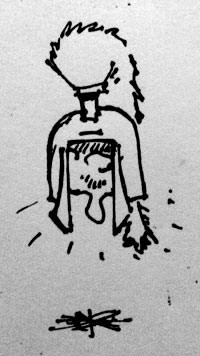