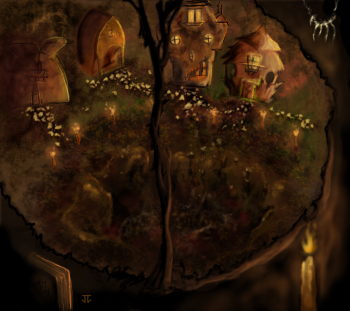 Fuelwen: None of us knew quite what to expect in this town. We approached cautiously- mostly. Nathaniel eschewed the ambush I had been planning and approached the town openly. Most of the party joined him, so Brilla and I held back, hiding in the woods, prepared to leap in when things went bad, as they inevitably would.

Or not. As it turns out, the locals were fairly nice. There was nothing personal about the assault on Quiet Citadel, they held no grudge and sought no vengeance and were happy to accept us into the town- for a night, anyway.

Brilla: This town was very curious and I did not trust it for a second. Most of the party decided to stride forward, though Fuelwen and I kept our senses about us and hid in the tree line; him naturally and me as a tree.

Eventually Fuelwen left from hiding when it appeared that the townsfolk weren't openly hostile. I decided to stay where I was, though, as you can never be too sure of one's intentions. That, and I was really enjoying the company of my fellow trees.

Dialogue with the priestess of Erythnul

Fuelwen: I mostly ignored Rake's conversation (and "conversation") with Tom Fick, Priestess of Erythnul. He converted with his typical enthusiasm. One among our party has completed the largest leg of his quest. In light of this, my quest seems even more impossible than before.

Brilla: There were lots of noises coming from the church, and they didn't quite sound like fighting. I could tell one of them was Rake, so what else could it be?

Rake fights for glory in the pit

Fuelwen: Depressed over the impossibility of my quest, I decided to move the process along. There was no way Tom Fick would allow us to remain in town without some participation in the rituals of slaughter. I pressed the point about the locked shed, Fick asked us to participate in ritual combat- demanded, I guess, but there was no reason to refuse the request.

We fought two pairs of ugly beasts. We killed them. Compared to an average battle, this was trivial. It brought back fond memories of my youth. A few miles from my town was a deep caldera where my peers and I would swim to spend hours fighting each other. Mostly to first blood, occasionally to disfigurement. Once in awhile, there was an accidental death.

Brilla: Once I was convinced things were safe, I approached from the tree line. Sadly, when things look their safest, they most often aren't. It seems that Rake has found a god in Erythnul and now he must have some sort of christening in the pit in the center of town. Despite his hatred of gladiatorial pits in the past, he seemed quite receptive to this one.

We had to fight two magmin and two howlers. The fight went well, and in a way, better than we thought it would with the absence of Ko. Nonetheless, we were victorious and Rake had but one task left. For that he went to Tom Fick, the head priestesses house, while everyone else was to sleep in the blood pit. I refrained from this and slept in the woods. The ordeal was despicable enough as was.

Exploring the rest of the island

Fuelwen: Fick did her thing with Rake, he was happy and a bit confused, but it was time for us to move on. Again, I was aching to return to my crew and get on with our real work- hunting down Sekolah to the west. We circumnavigated the island, stopping off in every major settlement looking for Willamina. We didn't find her, of course.

Brilla: The search over the rest of the island was to no avail. Luckyly for us, Kordrik did some searching on our behalf and found that Willamina was on the list of individuals that were on the crusade. We headed back to Quiet Citadel to meet the ships as they arrived at harbour.

Fuelwen: But we did return to Quiet Citadel just in time to meet the returning crusaders. The idiots were dressed like turtles in the heaviest armor possible- I can't imagine facing them on the battlefield. I would die from laughter. In any case, uninterested in trying to pry my way past their shells, I held up a sign with Willamina's name on it.

She eventually found me, and greeted me with a staggering blow. She was displeased with the improvements we had made in her absence. After confirming that she was One Thumb's heir, I offered up the will. She had no interest in his possessions, so, to get it out of the way, I had her sign the tavern over to me.

I have no interest in being an innkeep, but I can either sell it and get more capital for the purpose of funding my expeditions, or I can spend a few weeks or months getting it settled in with a competent manager, and use it as a steady source of income- if I'm willing to return to Great Fortress from time to time. And there is the fact that it is capable of teleporting.... Such a thing is not to be looked upon lightly, especially given the challenges posed by my quest. I will most likely keep the tavern.

Brilla: Not having a description of Willamina, Fuelwen decided to make a sign and look for her to come to us. Sadly, we were harassed by a returning Paladin asking for his sign. He was mostly ignored as we came upon the Salty Dog to find an angry mob.

Yelena and the clerics seem to have reverted the economy back to how it was. Unfortunatelly it is another extreme as we found that it is illegal to by things for others, like a drink. I'm sure in a few generations they will get things right. That, or the Erythnulites will one day wipe them out.

Willamina eventually made her presence known to us by kicking Fuelwen to the ground. There was a small amount of bickering back and forth but in the end the bar was signed over to Fuelwen as Willamina did not want anything to do with Great Fortress.

To help ease the crowd, it was suggested that I tell the story of our adventure and the prosperity of the commoners during their fight against the Erythnulites. It was a wise choice as I believe I was able to tell the story the best. I have a feeling a little bit of the story was lost on the audience, but I assume that was use to some *ahem* interruptions.

You will have one day of downtime as the ship travels uneventfully, and six days of downtime in Great Fortress as paperwork is processed. Let's take care of it here/by email.