Gashadokuro Emerges from the Hellhole 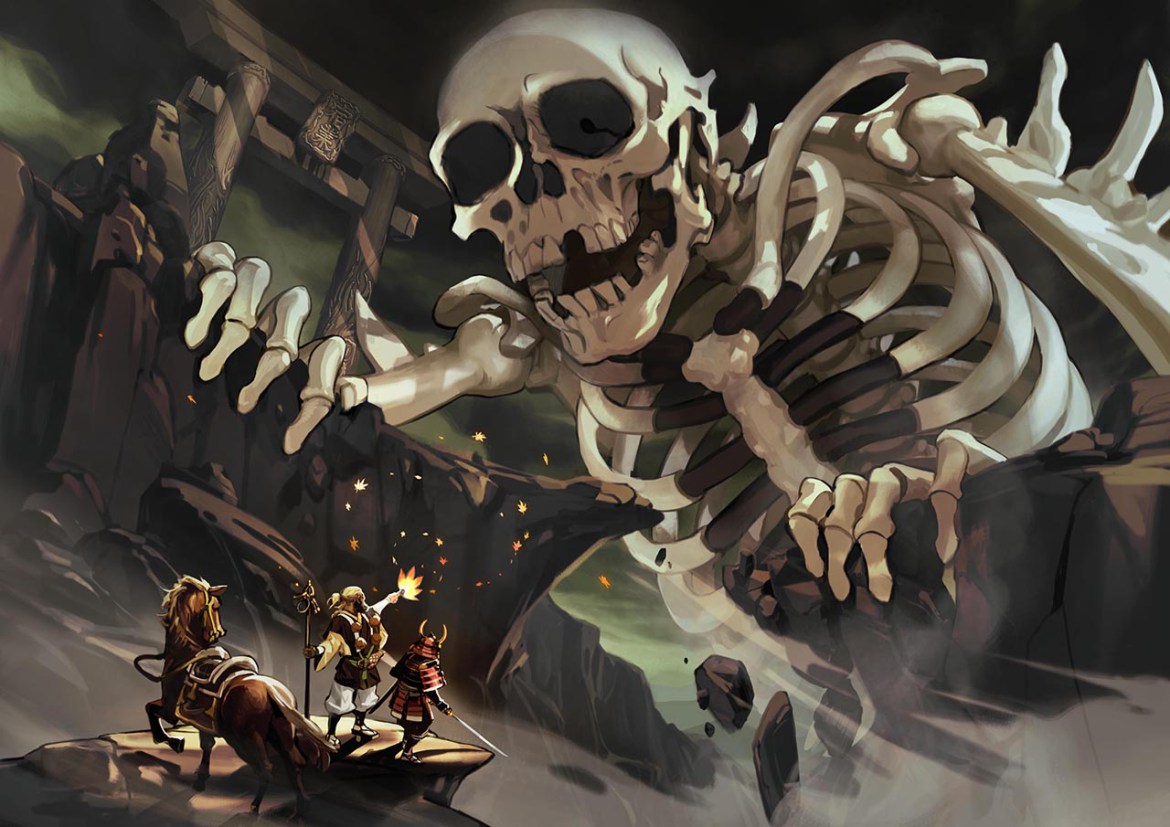 📚 Annalana: A giant demonic skeleton bursts forth from the hellhole. It is a structure of bone, and as it comes to the surface it soaks into it all of the recently dead bodies of the demons, giving it a fleshy shape, stepping onto the ground. It is a hulking 50’ tall.

The base is in a panic and it wipes away the keep with one fell hit.

Annalana and Elis rush to dig out our target while Qistis goes to the side in case we need a distraction. Elis uses his knowledge of archeology to direct Annalana to dig. Annalana and Elis hold up a beam while Qistis rushes in. Annalana throws the key to her and the door is stuck! Qistis tells him to back up and she thunder waves it off the hinges. As soon as they emerge, Annalana loses her grip, dropping the beam.

As we get ready to run, we realize that we have to lead this thing somewhere. We debate the merits of a variety of locations and determine that we can lead it to the Koru, where the behemoth could possibly take care of this.

We led it to the Koru and at that point, it starts to shed creatures that attack us and breathing hellfire towards us. We engage with it until the Koru comes and stomps it to death.

🌲 Qistis: Never in my life have I seen something so big appear out of a hellhole. Though really I haven't seen all too many things appear out of a hellhole, but this in particular seems like a very rare case. After we've gotten that dragonkin from the prison he waltzes off back to Drakenhall while we need to deal with this 'thing'.

We decide that having it get in the direct path of the Koru Behemoth would be the easiest way of permanently dealing with the thing (with the next best idea of marching off into the Sea, though it may come back so we decide against it). We do our best to distract it and keep it out of the path of innocents (including some very annoying outriders from the Queen's Woods), but we do eventually get it directly under the Koru's leg and it splatters into a fine bloody mist.

The Gashadokuro’s heart crawls out of the body and attacks!

📚 Annalana: Annalana declares that the creature is in violation of Treaty of the Stonevader, a series of documents forbidding demonic actions on his family land. We then engage the giant beast.

As we fight the beast the world begins to melt around us, including us. The creature has pseudopods that keep pulling Elis towards its maw. Eyestalks come out and stare down Qistis.

The creature explodes in a slurry of eyes, teeth, and gore.

🌲 Qistis: While the body may have been dealt with, the damn heart seems to have a life of it's own. I keep my distance and concentrate on my spells, empowering them to the limit of my strength. Eventually we best it and destroy the heart of this demon. Whatever it was it was quite powerful and I'm sure agents of the Great Gold Wyrm will no doubt soon be trying to find us to ask questions.

Rider from the Koru Approaches

📚 Annalana: A rider on a griffon approaches from the Koru.