Dario: Caravan travel has thus far proven to be more mundane than I had hoped, though I am glad that nary a bandit has bothered our slow-moving city on wagon wheels. The heart of this city is the Colonel Major, who despite his drunken (but not lecherous) ways, has seen fit to purchase goods for the war effort out of his own purse.

One night by the fire the Colonel sets to telling stories we've heard all the nights before and a woman, one kind to the eye, whispers in his ear. After the stories have all been spent he confides in me and those who continue to sit around the fire. He tells us that the woman, Rachael Mancari, has a son by the name of Timmy who has been missing all day. We are tasked with finding the boy.

We question his friends and discover that Timmy was the king of hide and seek—he was never found.

Nict: Ah, the merchant life is good. I've managed to make a contact that has helped me get out of my families caravan and into a place where I can make a name for myself. I am currently helping Delia keep her wagon/shop moving. Most of the tasks I am given are mundane, but well within my skill set. No one suspects my curse so my days go well. I do find myself missing Sehra & Sheiah, but I'm sure they are doing fine & it's better that they spend a few years still learning trades before moving away from mom and dad's caravan.

The most interesting thing about this caravan is the charismatic leader Colonel Major. He seems laid-back but every once in a while I see a clarity in his eyes that tells me he knows everything going on around him. He seems to have a good grip on the comings and goings on this journey north.

One night, he calls us to him and asks us to look into something quietly. I'm one to understand one needs their secrets so I agree. We are charged with finding a boy, "Timmy". He has been missing for the day.

We interview his friends trying to find any clues to his whereabouts, but sadly, they are at a loss to where he is. With a little help from the taffies I have on me. (I find that they were a worthwhile purchase even more now than then.) They say that the last time they saw him was playing a game of hide-and-seek. This motley crew I find myself in decide to travel to our last stopping point to find the area the boys were playing in. We do eventually find the place...

Belt buckle in a bear trap

Dario: Provided horses, we travel through the night to where the boy was last seen. Taralon uses his gift to divine the direction of the boy and we make our way sloooooooooowly. I attempt to scout ahead but am told not to, as my tracks will obscure the boys.

Eventually we come to a spent bear trap, twenty feet 'round and deep. We search the area, turning up new tracks, presumably belonging to hunters who have taken the boy. Knit heads back for our horses and I do a throughout search of the pit. I find a belt buckle forged by the boy's parents with his house upon it. I also find a smooth white stone that is cupped easily in the hand.

To the sight of Taralon and Thaddeus the stone has an aura of necromantic energy. Before I destroy it they cry out that it also radiates conjuration and abjuration. I have little idea what they are talking about but apparently it is not an object that is wholly evil.

Nict: To be honest, I don't know what to make of the pit. It seems like someone trapped the boy. We see what seem to be some of his belongings, but we also find these odd white stones... 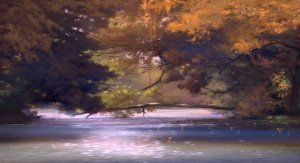 Dario: We follow the trail of the boy for days, hunting, sometimes poorly, as we move along. We lost the trail at the edge of the river and Thaddeus declares the tracks gone through magic. Taralon is a living map and guides us to the nearest town, Pendarguin.

Entering the town we hear enchanting music coming from the single Inn the town has to offer. The women of three, a troupe of no small renown are playing and all are transfixed.

After two hours of encores, the ladies retire for the evening and we go about questioning the locals, trying to find the boy. All roads lead to nothing and we turn in for the night.

Nict: The journey, while we passed some beautiful land, was uneventful. We are lucky to have Taralon. He seems to know a bit of almost everything. When we get to a town he mentions must be Pendarguin. I sigh a bit in relief.

Inside the town, the Women of Three are playing. They have built up quite a name fore themselves. And every bit of their renown is well-deserved. I can sense magic in their voices, but the talent is real. Our group listens transfixed although when their many songs are over, they look the room over for the kidnapper. I, on the other hand, go to get my first real meal in several days...

Burning down the house 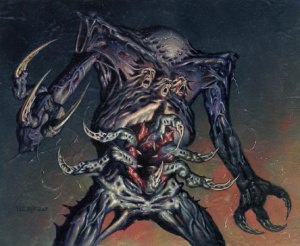 Dario: I hear the sound of a sword being drawn and I awake instantly. Like a lion pouncing on prey I draw my greatsword and disembowel the vile creature that was formerly the innkeeper. Wolfdale has forced open the door to the room holding the women of three, only to discover that one of them is eating the other two. Wolfdale runs in fear. I charge.

I fend the transformed occupants of the inn while everyone else makes their way to escape out the window. With a dramatic flare I dive out the window, not thinking of how the landing might be. I quickly attempt to dodge the ground and am rewarded as I descent slowly to the ground. I'm not sure which of my companions helped me, but I am grateful.

I get to my feet, wipe off some mud, and move to see what everyone cowers from. Around the corner of the inn is a horror that stands as tall as the nearby buildings. It has three screaming faces in it's chest, one of which is Timmie, the boy we seek. I feel fear, just like other men do, but while it stops others it just fuels my actions. I walk across the cobblestones, sword pointed right at it. I'm ready to save some lives.

The battle moved quickly. The divine blessings of Venal saved me more than once, as did the courageous work of my companions.

Nict: I wake to thumping at one of the doors across the hall that just won't stop. I go out to see what is happening. When I open the door, I see the proprietor banging on Thaddeus' door. I ask him what's going on, and he turns. I could not be more surprised, but what I see. His eyes seem hollow and he seems to feral and monstrous. He attacks and I defend myself automatically with the fire I've tried so hard to hide.

I go and try to see if the Women of Three are okay, and find one of them feasting on the others. I must have made a sound then because, she turned to me. I panic and throw a beam of fire full into her face. She howls and rush around the room, but I am not waiting to find out if she's okay.

I rush out knocking a feral man from one of my companions. I'm so panicked that I don't know which. In all honesty, it doesn't matter. All that matters is that there are others that are normal. I walk outside and see Thaddeus looking around the edge of the building. I hear something above us and see the Paladin bound out the window. Luckily for me, I have my wits about me and cushion his fall with a wall of warmth.

When we do finally decide to round the corner of the building, I have to remove my eyepatch to believe what I am seeing. It is a horrible monstrosity as out of a nightmare. It has clawed hooks and I see Timmy and two other boys faces staring out from the things chest. We fight and kill the thing & I quickly redon my eyepatch.

It's all a blur after that. Dario crushes one of the stones and Thaddeus screams and doubles over. The paladin knocks him out to try to stop his pain. I am nearly at the end of my endurance. Luckily, the remaining villagers usher us with them to the ferry and we pull away from shore. Even more luckily, these things don't seem able to follow us...