Dario: Fire raged on the shore, allowing us to see the deformed outlines of the monstrous beasts milling about the shoreline, clawing the air in our direction. My caravan-mates and I do our best to quell the fear in the smallfolk and crying falls to a soft murmur. Mayor Malen and his men talk amoung themselves and are overheard saying "Salla didn't warn us...". As I was nearly eaten by one of these beasts, this flags my interest.

The mayor's lips are loose and he tells us that Salla is the caretaker for the city of Pendarquin. Every city is supposed to have one but most don't, so I was surprised to find out about this.

Nict: I'm not sure how many of my compatriots have seem my accursed eye, but they have the good sense not to mention it while we are with the villagers. I do not need a panic to start over all else. Thaddeus has woken up.

The villagers seem surprised this could have happened. They say they have a guardian, Sala, that should have warned them. It is interesting, but there are more important things to discuss.

After lengthy discussions, we decide to go back to shore when we see that the horde of monstrosities have retreated.

Dario: As the sun waxed the monsters waned, disappearing with the night. Once the sun is completely in the air we see a rider on the shore. Tarralon recognizes him as a warrior in the service of the Church of Dreams. We make our way to shore.

The warrior introduces himself as Johannes and his blood is mixed with that of the elves. He gives a name to the creatures we fought, Assybah's handmaidens, and the recipe for them comes from a long dead necromancer. We explain that the city's protector was missing in action and he dictates that we journey to find out why. 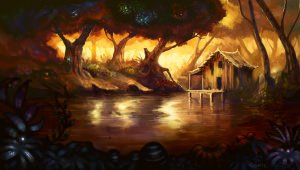 Nict: We find Sala's hut in the woods. While most of the party takes the long way around the front. I swim through the lake to get up on the deck behind the house. I swim across and climb up the deck which I'm sure acts as a pier although there is currently no boat. Since I am alone, I use my power to make a stick glow as if on fire and throw it into the room to illuminate the area. In it I find blood and signs of a struggle. Warning the others, I make my way inside, heart pounding like a hammer on an anvil. Inside we find more of what I expect to find from my view outside.

I find a string on the deck hanging in the murky waters but have trouble fishing out whatever is at the end of it. I dive down to find out what it is as there are no volunteers for the task. When I reemerge I find that what was at the end of the rope is a box that glows faintly magically. There is a riddle to open the box, but our group is... lacking in the riddle solving department. Instead, Terralon offers the brute, logical force method as we systematically try all combinations possible & finally open the thing. By the way, the answer to the riddle is ROPE.

Dario: Johannes parts ways for a personal quest and we continue to seek Salla on our own. Her home is easy to find, we just follow the eerie lack of wildlife. Across a small lake we spy a derelict house and make our way there.

We find signs of struggle and a lot of blood and hair, but no bodies. Under the porch that hangs over the lake we find a strange steel chest. The "keys" and a journal are found in a false bottom of a drawer. Examining the chest yields the following words, written in the language of the ancient shadedale mountain dwarves:

Ten trolls strength, ten trolls length, one troll can pick it up, no troll can stand it up.

We pour over the puzzle for the entire night, eventually solving the riddle—ROPE. Inside the chest are fifteen soulstones, a list of those who died at Kethren's field centuries ago, 209 ancient gold coins of the dwarves, a ring of dwarven nobility of the shadedale mountains, two potions, and a hastily written note that says:

If you find this, inform the Dream Knights that their dust is being reappropriated

As the crow flies

Dario: Nict throws a torch at a raven in the ceiling as Tarralon yells for us to not hurt it. Apparently the bird is a wizard's servant and Tarralon says that we should follow it. I disagree, but am in the minority, so I keep a watchful eye.

As days pass it is evident that we are making progress towards Eliador and when we get there we are greeted with destruction. The fog takes the shape of a foul rider on horseback for a moment, revealing shambling smallfolk. We make quick work of the aberrations. 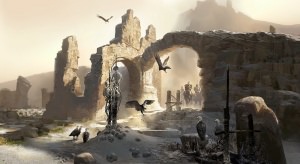 Dario: We find the crypts defiled. The symbols of Belinos are smeared with blood and excrement. Exploring the underground tombs we discover a secret passage and hear the sounds of battle!

Nict: From burned out and destroyed towns to a crypt that has clearly been desecrated by a malignant force. What has this simple merchant done to deserve this? Is my family truly cursed?

With the paladin there, of course, we decide that entering the once-hallowed mausoleum. We find a beautiful statue and after someone trips a mechanical device, a ladder downward is uncovered with sounds of battle raging beneath us we prepare to make our way down...